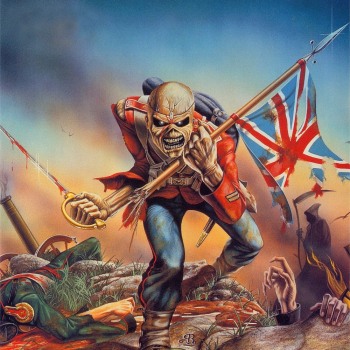 Eddie, also known as Eddie the Head, is the mascot for the British heavy metal band Iron Maiden. He is a perennial fixture of the group's artwork, appearing in all of their album covers (as well as most of their singles) and in their merchandise, which includes t-shirts, posters and action figures. On top of this, Eddie features in all of the band's concerts, as well as in the first-person shooter video game, Ed Hunter, and as an unlockable character in Tony Hawk's Pro Skater 4.

Originally a papier-mâché mask used in Iron Maiden's stage backdrop, the band transferred the name "Eddie" from the mask to an illustration by Derek Riggs, which was used as the band's debut album cover. Although he is occasionally described as "zombie-like" in the press, Eddie assumes a different guise relating to the themes of individual albums and their corresponding world tours, and has appeared as a cyborg, an Egyptian mummy and a lobotomised mental patient amongst others.

The very first version of Eddie was a mask made by an art student who was friends with Dave (Lights) Beasley, then in charge of lighting, pyrotechnics and other effects for Iron Maiden's live-show. According to Lights, the original mask was a papier-mâché mould of his own face, which was then used in the band's backdrop, consisting of LED lights and the band's logo. At the end of their live set, during the "Iron Maiden" song, a fish-tank pump was used to squirt fake blood out of the mask's mouth, which typically covered their drummer, Doug Sampson. After this initial incarnation, Lights constructed a larger mask out of fibreglass, equipped with flashing eyes and the ability to release red smoke from its mouth.

The band's bassist and founder member, Steve Harris, states that the name "Eddie" comes from the fact that said mask was referred to as "The Head", which sounded like "Ead" in the band members' London accent. According to guitarist Dave Murray the name was also inspired by an old joke:

"A wife had a baby, but it was born with only a head and no body. 'Don't worry,' says the doctor. 'Bring him back in five years time and we'll probably have a body for him'. So five years go by, and there's Eddie the 'Ead, as his parents have called him, sitting on the mantelpiece, when in walks his dad. 'Son,' he says, 'today's a very special day. It's your fifth birthday and we've got a very special surprise for you.' 'Oh no,' says Eddie. 'Not another fucking hat!'"

Once Iron Maiden had secured a record contract with EMI, the band's manager, Rod Smallwood, decided that the band needed "that one figure who utterly stamped his presence and image on the band in a way that was obvious enough to make a good album cover." After seeing some of his artwork on a Max Middleton poster, Smallwood set up a meeting with Derek Riggs and asked to see some of his other illustrations, in the midst of which was the band's first album cover. Originally created as an idea for a punk record, which Riggs states in the 12 Wasted Years documentary was based on an alleged American's skull stuck to a Vietnamese tank, the band had extra hair added to the illustration, making it more suitable to their style of music, and transferred the name from the original masks they used onstage. Surmising that the creature had "great visual continuity," Smallwood decided it would be used for all of the band's artwork.

Smallwood claims that Rupert Perry, EMI's then managing director, came up with the idea that Eddie could become a more active part of the band's concerts, originally portrayed by Smallwood himself, wearing an Eddie mask and a leather jacket. The classic "walk-on" Eddie was created for The Beast on the Road tour by Dave Lights after seeing a pantomime version of Jack and the Beanstalk, which used similar giants consisting of "basically a bloke on stilts but dressed up to look about ten feet tall." As the band's stage show expanded, an additional gigantic Eddie was also incorporated at the back of the set during "Iron Maiden", which, like the "walk-on" Eddie, would match the theme of the current tour, such as the 30-foot, mummified version used during the World Slavery Tour which shot sparks from its eyes.

Eddie's debut appearance was on the band's first single cover, "Running Free," in which his face was covered by shadow to protect his identity before the release of the band's first album. Since then, Eddie has assumed a different guise for each cover, such as a "mummified Egyptian god" for Powerslave, a lobotomized mental patient for Piece of Mind, emerging from a grave in Live After Death, and a cyborg for Somewhere in Time.

Some of the band's artworks have proved controversial, such as the cover of "Sanctuary," in which Eddie can be seen standing over the corpse of Margaret Thatcher. It was claimed that Iron Maiden were banned from releasing the single without censoring the cover, blacking out Thatcher's face, although Riggs has since claimed that this was fabricated by the band's management to gain publicity in the British tabloids.

The most amount of controversy, however, was reserved for the band's third album, The Number of the Beast, whose artwork depicted Eddie controlling Satan like a marionette. Originally created by Riggs for the "Purgatory" single cover, but deemed too good by Smallwood and withheld for the next studio release, the image, along with the record's title track, led to the "moral majority" labelling Iron Maiden as Satanists and organising public burnings of their back-catalogue in the United States, which in turn gave them a large amount of publicity.

During the course of the Troubles in Northern Ireland, Eddie the Head, specifically as he appeared on the sleeve of "The Trooper", became an unofficial mascot of the Ulster Freedom Fighters loyalist paramilitary group and was the main figure on a number of the group's murals. The loyalist representation frequently carried a tattered flag with the emblem of the Ulster Defence Association rather than the Union Flag as on the Iron Maiden sleeve.

During The Final Frontier World Tour in 2011, after Iron Maiden did not perform "The Trooper" in Belfast, Blabbermouth.net reported that there had been speculation amongst fans that this was due to the artwork's use in murals.

Gibson.com described Eddie in 2008 as "the most recognizable metal icon in the world and one of the most versatile too," while in 2009 Gigwise called him "perhaps the most enduring band mascot of all time." Many artists who have been influenced by Iron Maiden hold their artwork in high regard, with Joey Jordison of Slipknot commenting that he bought his first album "on the strength of the cover alone" and Corey Taylor, also of Slipknot, stating that "there wasn't a dude that I hung out with that wasn't trying to draw Eddie on their schoolbooks." Steve-O, from Jackass, says that they have "the coolest album covers in the music industry" and Lars Ulrich, of Metallica, comments that "they had the best packaging, the coolest T-shirts — everything." Mick Wall describes Eddie as "the immortal soul of Iron Maiden, the defining symbol of the eternally youthful, blissfully uncompromising spirit of the band's music."

In 2008, Eddie won the "Icon Award" at the Metal Hammer Golden Gods.

From 1980 onwards, the band's Eddie artwork was provided exclusively by Derek Riggs until 1992, when the band decided to accept contributions from other artists, with Smallwood explaining that they "wanted to upgrade Eddie for the '90s. We wanted to take him from this sort of comic-book horror creature and turn him into something a bit more straightforward so that he became even more threatening." Since then, Riggs has contributed much less to the band's artwork, creating part of one studio album, one single and two compilation covers, while the band have employed a number of different artists: