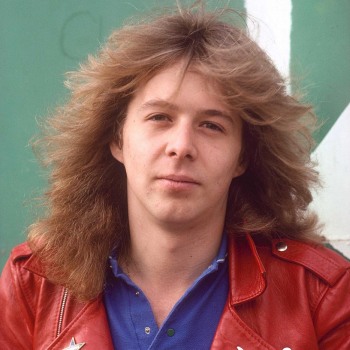 Previously a member of Samson, Burr joined Iron Maiden in 1979. An acquaintance of then-Iron Maiden guitarist Dennis Stratton, Burr played on their first three records: Iron Maiden, Killers and their breakthrough release The Number of the Beast. Burr was fired from the band in 1982 during The Beast on the Road tour. He was replaced by the band's current drummer, Nicko McBrain. Burr co-wrote one song on The Number of the Beast, "Gangland", and another song, "Total Eclipse", that was cut from the album and showed up as the b-side of the "Run to the Hills" single, and later on the Number Of The Beast remastered CD re-release.

Burr also appeared on "The Number of the Beast" and "Run To The Hills" videos.

After leaving Iron Maiden, Burr briefly played in the French group Trust, thus switching places with McBrain, and briefly with the American band Alcatrazz. Burr was featured in the short-lived NWOBHM supergroup Gogmagog which also included ex-Iron Maiden vocalist Paul Di'Anno and future Maiden guitarist Janick Gers. He also had a band known as Clive Burr's Escape (later known as Stratus), featuring former Praying Mantis members, which disbanded after releasing one album. Burr then joined Dee Snider in his post-Twisted Sister outfit Desperado, which was never fully realized due to a falling out with the band's record company. Burr performed with British bands Elixir and Praying Mantis in the 1990s, but did not become a member of either.

Burr's signature white drum kit was donated to the Hard Rock Cafe in London in 2005.

Iron Maiden lead singer Bruce Dickinson considered Burr to be "...the best drummer the band ever had. That's not taking anything away from [present drummer] Nicko. Technically, Nicko's probably a far more competent drummer than Clive. It's just that Clive had this incredible feel, and you can't learn that, and I regret that he wasn't given more time to try and sort himself out." Iron Maiden guitarist Adrian Smith also praised Burr's drumming ability. "Clive was a great drummer, an Ian Paice-type drummer, steady and solid with a nice feel to everything."

Burr was diagnosed with multiple sclerosis, the treatment of which left him deeply in debt. Iron Maiden staged a series of charity concerts and were involved in the founding of the Clive Burr MS Trust Fund. Burr used a wheelchair because of his condition.

He was also the patron of Clive Aid, a charity formed in 2004. Clive Aid has continued to raise awareness and funds for various cancer and multiple sclerosis programs around the world through the staging of rock events. Burr attended many of these events.

In a statement released on the band's website Iron Maiden bass player Steve Harris stated "This is terribly sad news. Clive was a very old friend of all of us. He was a wonderful person and an amazing drummer who made a valuable contribution to Maiden in the early days when we were starting out. This is a sad day for everyone in the band and those around him and our thoughts and condolences are with his partner Mimi and family at this time."