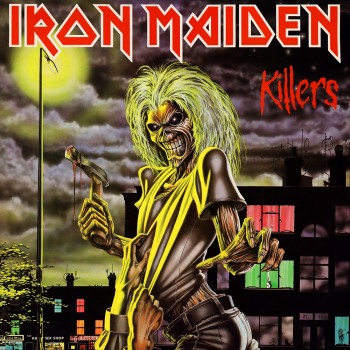 Killers is the second album by British heavy metal band Iron Maiden, released on 2 February 1981 in the UK, and 6 June 1981 in the U.S. The album was their first with guitarist Adrian Smith and their last with vocalist Paul Di'Anno, who was sacked after problems with his stage performance arose due to his alcohol and cocaine use. This was also the first Iron Maiden album made with veteran producer Martin Birch, who went on to produce their next eight albums before retiring after Fear of the Dark in 1992.

The song "Wrathchild" is the only regularly played track from the album, appearing in almost all their concert tours. The song was covered in 2003 by British metal band Sikth and featured as a b-side on their single "Scent of the Obscene". The song was also covered in 2005 by female tribute band The Iron Maidens on their 2007 album Route 666 and again in 2008 by Gallows on the tribute CD Maiden Heaven: A Tribute to Iron Maiden released by Kerrang! magazine. "Wrathchild" was featured in the PlayStation 2 game Guitar Hero Encore: Rocks the 80s.

Killers is the only Iron Maiden album to feature two instrumentals and was written almost exclusively by Steve Harris, with only minor assistance from the rest of the band (the title track and "Twilight Zone" being the only other songs to receive additional writing credits). Each song, with the exception of "Murders in the Rue Morgue," based on the story of the same name by Edgar Allan Poe, and "Prodigal Son," had been written in the years prior to the recording of their debut album, although none were recorded professionally until the Killers sessions, apart from "Wrathchild" (an early version of which featured on the Metal for Muthas compilation).

The U.S. edition, which came out a few months after it did in the UK, was initially released on Harvest Records/Capitol Records and subsequently on Sanctuary Records/Columbia Records. "Twilight Zone" was also added to the album.

The Killer World Tour was the tour in support of the album and would feature the band's earliest shows in the U.S., the first being at The Aladdin, Las Vegas in support of Judas Priest.