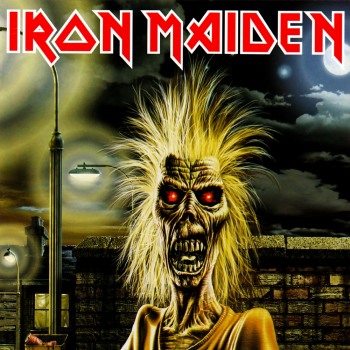 Iron Maiden, released on 14 April 1980, is the debut album by the British heavy metal band Iron Maiden. It was released by EMI in the UK, and a few months later in the U.S., originally on Harvest/Capitol Records and subsequently Sanctuary Records/Columbia Records. The U.S. release also included the song "Sanctuary", only released in the UK as a single. In 1998, along with the rest of the band's pre- X Factor releases, Iron Maiden was remastered with "Sanctuary" added in all territories.

Although Iron Maiden have since criticized the quality of the album's production, the release was met with critical and commercial acclaim, debuting at number 4 in the UK Albums Chart as well as achieving prominence for the band in mainland Europe.

This was the band's only album produced by Will Malone, who Iron Maiden have since claimed lacked interest in the project and effectively left them to produce most of the album themselves, which, according to bassist Steve Harris, was completed in just 13 days. Prior to the recording with Malone, the band made two attempts in December 1979 with two different producers while still a four-piece. Guy Edwards, the first, was dismissed as the band were unhappy with the "muddy" quality in his production, while Andy Scott was sacked after insisting that Harris use a plectrum rather than his fingers. After these efforts, the band decided not to sack Malone as Steve Harris describes that they could "bypass him and [go] to the engineer." The group criticized the quality of the production, although many fans still prefer the raw sound to the songs. Although Allmusic states that this style was "clearly drawing from elements of punk rock," Harris later stated that the band despised everything about punk.

This was also the only studio album with guitarist Dennis Stratton, who, having been brought in as a last-minute placement, was sacked due to "musical differences" after the band's European tour in support of Kiss. Suspicions were first raised during Iron Maiden's recording, when Stratton added Wishbone Ash-esque harmony guitars and backing vocals reminiscent of Queen to "Phantom of the Opera", which the rest of the band immediately disapproved of and had removed. Although Stratton states that he was not "trying to push the band in a new direction," Harris comments that it "really pointed up the difference between Den and us," after which he began to notice that "Dennis was so much more into playing stuff like "Strange World" than he was "Iron Maiden" or "Prowler", because it was more slow, melodic... when he was soloing on one of the heavier songs, it wasn't with quite the same passion."

The 1998 re-release differs from the original with the addition of a re-recording of the song "Sanctuary" found on the original U.S. version of Iron Maiden and the UK "Sanctuary" single. The original version appeared on the Metal for Muthas compilation.. The re-release also features a different cover; a digital recreation by original artist Derek Riggs, with a portion of the original artwork instead being used on the disc itself.

The band undertook the Iron Maiden Tour in support of the album, during which they played their first ever concerts in mainland Europe, where they were surprised to discover how successful Iron Maiden had been outside the UK, with Steve Harris commenting, "The prestige of doing so well in the UK had turned into a sort of word-of-mouth thing, and we'd turn up in placed like Leiden, in Holland, places we'd never even heard of, and they'd have these massive banners waiting for us with "Iron Maiden Go Over The Top" written on them and all this. It was unreal."

"Running Free" was released as a single on 23 February 1980, reaching number 34 in the UK Singles Chart. The band also performed the song on the UK TV show Top of the Pops, refusing the usual tradition for artists to mime and thus becoming the first group to perform live on the show since The Who in 1972. Vocalist Paul Di'Anno, who wrote the song's lyrics, describes it as "a very autobiographical song, though of course I've never spent the night in an LA jail. It's about being 16 and, like it says, just running wild and running free. It comes from my days as a skinhead." According to Classic Rock and Metal Hammer contributor Dave Ling, writing in the Metal for Muthas CD re-issue liner notes, "Sanctuary" was originally penned by guitarist Rob Angelo, a member of Iron Maiden in 1977, who was paid £300 for the song's rights. The "Sanctuary" single was released on 7 June 1980 and charted at number 29, with the censored cover of Eddie standing over Margaret Thatcher's body earning the band publicity in the British press. Managers Rod Smallwood and Andy Taylor's management company would be named after the song.

Although "Strange World" is credited solely to Harris, Paul Day, the band's original vocalist from 1975-1976, claimed that he also contributed to the song. "Charlotte the Harlot", their only song to have been written by Dave Murray alone, is the first of four Iron Maiden tracks which make reference to the fictional prostitute 'Charlotte,' although Murray states it was "based on a true story." The 7-minute epic "Phantom of the Opera" is also a personal favorite of Steve Harris and is still performed live relatively frequently. With lots of mood and time-changes, Harris marks it as "the first song I’d written that was a bit more proggy." "Transylvania" is an instrumental piece, composed by Harris, which was later covered by Iced Earth on the album Horror Show.

Of all the album's songs, "Phantom of the Opera", "Running Free", "Sanctuary" and "Iron Maiden" are the most frequently played in the band's concert tours, with the last being played at every show since the band's inception and signalling the arrival of Eddie, the band's mascot, onstage. All of the record's songs, excluding "Strange World", have been recorded with Bruce Dickinson on vocals, either on live albums, studio B-Sides or both. "Strange World" and "Transylvania" were the only songs not played on the "Eddie Rips Up The World Tour", 2005. Four songs ("Prowler", "Remember Tomorrow", "Running Free" and "Iron Maiden") were covered for the 2008 tribute album Maiden Heaven: A Tribute to Iron Maiden released by Kerrang! magazine.

When first issued in 1980, the album received immediate critical acclaim, with Geoff Barton, reviewing the album in Sounds, writing, "Heavy metal for the '80s, its blinding speed and rampant ferocity making most plastic heavy rock tracks from the '60s and '70s sound sloth-like and funeral-dirgey by comparison."

Since its release, Iron Maiden has continued to receive praise from reviewers, with Allmusic describing it as "a landmark" as well as "no better place to hear how both punk and prog rock informed the New Wave of British Heavy Metal." In addition, Sputnikmusic describes it as "one of the top debut albums in the world of heavy metal," containing "the raw, aggressive power [which] defines the early years of the band."

Iron Maiden is one of two Iron Maiden albums listed in 1001 Albums You Must Hear Before You Die ( The Number of the Beast is the other).