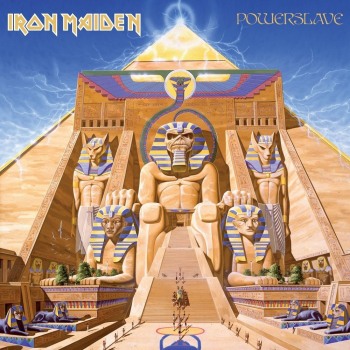 It is notable for its Ancient Egyptian theme displayed in the cover artwork, lifted from the title track, which was carried over to the album's supporting tour. The World Slavery Tour began in Warsaw, Poland on 9 August 1984, and is widely regarded as being the band's longest and most arduous to date, as well as leading to the live album Live After Death.

The release also contains a musical re-telling of Samuel Taylor Coleridge's "The Rime of the Ancient Mariner", which uses pieces of the original poem as lyrics and is, furthermore, Iron Maiden's longest song to date (at 13 minutes and 42 seconds in length).

Powerslave is also notable as being the band's first album to feature the same lineup as the previous one, which would remain intact for two further studio releases.

"2 Minutes to Midnight" and "Aces High" were released as singles.