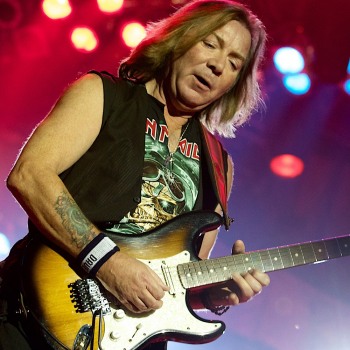 David Michael Murray (born 23 December 1956) is an English guitarist and songwriter best known as one of the earliest members of the British heavy metal band Iron Maiden. Along with the group's bassist and primary songwriter Steve Harris, Murray has appeared on all of the band's releases.

Growing up in various areas of London, Murray became a member of a skinhead gang before he took an interest in rock music at 15 and formed his own band, Stone Free, with childhood friend Adrian Smith. After leaving school at 15, he regularly answered advertisements which appeared in Melody Maker before auditioning for Iron Maiden in 1976. A short while later, Murray was sacked following an argument with the group's lead vocalist, Dennis Wilcock, and spent six months in Smith's band, Urchin. In Spring 1978, Murray was asked to rejoin Iron Maiden following Wilcock's departure, in which he has remained to this day.

As a child, Murray's family lived in poverty and were constantly moving to different areas of London, which meant that he was often bullied and involved in fights. By the time his family settled in Clapton in 1970, Murray joined a skinhead gang and "had a violent couple of years of being out on the street." He developed an interest in rock music when he was 15 after hearing Voodoo Chile by Jimi Hendrix on the radio, about which he recalls, "everything changed, just like that. Getting into rock music wasn't like a gradual process for me; it was completely sort of extreme, totally black and white." After "hanging 'round record stores" and acquiring several Hendrix and blues albums, Murray decided to take up the guitar. At 16, he formed his first band, a trio called Stone Free, which also included Adrian Smith on vocals, who would also become a member of Iron Maiden in 1980. From there, Murray would answer ads in Melody Maker and regularly audition for different bands at the weekend, leading to short stints in Electric Gas, "this sort of soft-rock, American-type band," and The Secret, "this sort of mad punk band," with whom he would record a single, "Café De Dance," in 1975.

In late 1976, he auditioned for Iron Maiden, eager to get back into "a more sort of heavy rock-type vibe." at the time, the band already had two guitarists, Dave Sullivan and Terry Rance, who disapproved of Murray's admittance, seeing it as a slight on their ability. The group's founder and bassist Steve Harris did not hesitate in choosing Murray over Sullivan and Rance, stating, "When the others made it plain that it was either them or Dave Murray, there was no choice. There was no way I was gonna let Dave go. Not only was he a nice bloke, he was just the best guitarist I'd ever worked with. He still is." Unfortunately, after only a few months in the band, Murray was sacked following an argument with then vocalist Dennis Wilcock after a show at the Bridgehouse pub in Canning Town which led him to team up with Adrian Smith again in his band, Urchin. During his short tenure with this group, Murray recorded one single, entitled "She's A Roller", after which he was asked to rejoin Iron Maiden following Dennis Wilcock's departure. Murray managed to hold down a 9 to 5 job working as a store keeper for Hackney Council, which he states was "so I could sleep off the night before," out was able to resign once the band signed with EMI in 1979.

Murray's solo guitar style throughout his career has been mainly based on the legato technique, such as on "The Trooper", which he claims "evolved naturally. I'd heard Jimi Hendrix using legato when I was growing up, and I liked that style of playing." He has also written songs for the band, though he is less prolific than other band members, usually forgoing lyric writing and concentrating on the musical elements of songwriting. He mainly co-writes songs with another member of Iron Maiden, "Charlotte the Harlot" being to date the only composition credited solely to him. Murray and Harris are the only members of Iron Maiden to have appeared on every one of the band's releases.

Throughout his career, Murray has used and endorsed Marshall amplifiers almost exclusively, other than on the 'Somewhere in Time' and 'Seventh Son...' albums and their respective tours, when he instead used Gallien Krueger amps. He has used Fender Stratocaster guitars almost exclusively as well. His black 1957/63 (the body is from a '63 and the neck is from a '57) Stratocaster, previously owned by the late Free guitarist Paul Kossoff, was used from circa 1978-1990. Murray states that he "bought it from an ad in the papers," and was later used as a template by Fender to manufacture an Artist Signature model in 2009, while the original now resides at his mother's home.

Murray has occasionally performed with various Dean, Gibson, Ibanez, ESP and Jackson electrics as well. As for acoustic guitar performances, Murray has used Gibson Hummingbird acoustic guitars live for the song 'Journeyman'. He also used a Gibson Chet Atkins solid body acoustic on the 'Fear of the Dark' tour for the song 'Wasting Love'.

Murray used his 1957/63 Strat (equipped with DiMarzio Super Distortion and PAF humbucking pickups) extensively, retiring it at the end of the 'Seventh Son...' tour in 1988, when he switched to Jackson guitars.

Since returning to Fender in 1995, following several years from 1986 - 1993 when he endorsed ESP and Jackson, Murray has had several variations of the Stratocaster made for him by Fender. The first was the prototype for what was to become the Hot Rod Re-Issue series.

Currently his main guitar is 2 - tone sunburst Fender Californian Series Stratocaster with 3 Seymour Duncan Hot Rails pickups and a chrome Floyd Rose tremolo system. He also plays a Gibson Les Paul Traditional model, which his guitar technician, Colin Price, states was originally brought in for Adrian Smith to try, but was then bought by Murray for practising on tour, and a cream USA Floyd Rose Classic Stratocaster (with a 22-fret maple neck and same electronics and hardware as the sunburst Strat) on stage. On the Maiden England World Tour he was also seen playing a Flying V.

In his spare time, Murray is an avid golfer as seen in the Rock in Rio DVD and Iron Maiden: Flight 666, revealing in 2002 that he tries to play "a couple of rounds in each week" and his handicap "can be anywhere from 15 to 24." Murray and his wife Tamar have one daughter named Tasha (born 1991).

When not on tour, Murray resides on the island of Maui, Hawaii.