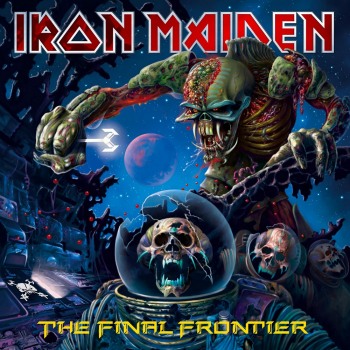 The Final Frontier is the fifteenth studio album by British heavy metal band Iron Maiden, released on 13 August 2010 in Germany, Austria and Finland, 17 August in North America, 18 August in Japan, and 16 August worldwide. At 76 minutes and 35 seconds, it is the band's longest to date and their first since A Matter of Life and Death in 2006 (the longest gap to date between two consecutive Iron Maiden studio releases). Melvyn Grant, a long-time contributor to the band's artwork, created the cover art.

The album received largely favourable reviews from critics and peaked at No. 1 in 28 countries. This included the United Kingdom, where it became the band's fourth release to top the UK Albums Chart following 1982's The Number of the Beast, 1988's Seventh Son of a Seventh Son and 1992's Fear of the Dark. On top of this, The Final Frontier also charted at No. 4 in the Unites States, marking their highest placement on the Billboard 200, in addition to gaining the band their first Grammy award in the Best Metal Performance category for the song "El Dorado", released as a free download on 8 June 2010.

EMI released the album in most of the world, while in the United States and Canada it was released jointly by Universal Music Enterprises and Sony Music Entertainment - the successor to the Sanctuary Records/Columbia Records joint venture that had previously controlled the Iron Maiden catalogue in North America.

On 22 April 2009, during a Rock Radio interview promoting Iron Maiden: Flight 666, drummer Nicko McBrain mentioned that Iron Maiden had booked studio time for early 2010. On 8 June, the album artwork, release date, and track listing were revealed, along with a free download of the track "El Dorado." The album was released as a regular CD, an iTunes LP, a digital download, a vinyl picture disc, and a limited collector's "Mission Edition", containing interviews and a game entitled Mission II: Rescue & Revenge.

The North American leg of their tour in support of the album started in Dallas, Texas on 9 June 2010, with a European tour beginning in Dublin on 30 July. As these dates preceded the record's release, "El Dorado" was the only new song played in 2010. The full album tour commenced in Moscow on 11 February 2011, and would see the band visit South East Asia, Australia, South America and Florida, as well as returning to Europe. The tour led to the release of a live album and video, entitled En Vivo!, which was released in March 2012.

Prior to its release, bassist and band founder Steve Harris was quoted as saying that he imagined the band would release a total of fifteen studio albums. The title, which also shares its name with its supporting tour and opening track, fuelled further rumours that The Final Frontier would be Iron Maiden's last, however the band members have since admitted that they hope to make further releases and continue touring in the future. Harris in particular has stated that "if there's time and we all wanna do it, then why not? It would be sad if we don't make another album, and sad for the fans too", while vocalist Bruce Dickinson admits that the title was largely mischief. In June 2010, Dickinson stated that he thought up the album's title 15 months previously: "I just thought 'We should call the next album The Final Frontier!' because it sort of is... It could be, but it might not be! It means we can go back to space for an Eddie and things like that, and we haven't done that for a while. It has a certain romance to it."

On 2 November 2009, Janick Gers confirmed to BBC News that the band already had new material written and would head to Paris, France, to start composing and rehearsing the bulk of the new album. According to Dickinson, "we had probably the least amount of preparation we've ever had, which is bizarre because it's the longest and most complicated record of all of them." After taking time off for Christmas, recording commenced in January at Compass Point Studios, Nassau, Bahamas, with Kevin Shirley producing. This would be the first time the band would return to the Bahamas since they last recorded at Compass Point in the 1980s, to which Dickinson remarked:

“The studio had the same vibe and it was exactly as it had been in 1983, nothing had changed! Even down to the broken shutter in the corner... same carpet... everything... It was really quite spooky. But we felt very relaxed in such a familiar and well-trodden environment and I think this shows in the playing and the atmosphere of the album.”

After a month in Nassau, the production was moved to Malibu, California, where the songs were mixed and additional vocals were recorded. On 6 April, Shirley told Blabbermouth that he had completed mixing the album, and commented on the final stages of its production on 6 May; "Bruce Dickinson flew in for a few days and sang all his parts before flying off to the four corners of the globe and Steve Harris stayed behind to finish the record with me. He's pretty hands-on like that. Adrian Smith [guitars] dropped in from time to time to hear stuff, and like in any band, not everyone has the same end result in mind, but we get there."

The album is the fourth for which Steve Harris receives writing credits for every track, following Killers (1982), Brave New World (2000), and A Matter of Life and Death (2006), although the final track, "When the Wild Wind Blows", is the only song which he wrote on his own. Adrian Smith explains that, in recent years, Harris is "more into writing lyrics and melodies and arranging" other members' tracks and only "brings in one or two songs" of his own.

"El Dorado" was released as a free digital download on the band's official website on 8 June and went on to win in the Best Metal Performance category at the 2011 Grammy Awards. The album's first and only music video was released on 13 July, filmed in Rendlesham Forest and containing the latter half of "Satellite 15... The Final Frontier". Although the album has no official single releases, both "El Dorado" and the second part of "Satellite 15... The Final Frontier" (along with its music video) were released as promo radio singles before the album's release. "Coming Home" was also released as a radio single on 27 October, featuring an alternative "radio edit" version of the song.

In a 1 July interview with Billboard, guitarist Dave Murray commented that the album mixes "straight-ahead, uptempo rock songs with good grooves with some other tracks that are kind of longer and more complex", referring particularly to "When the Wild Wind Blows", the band's third longest song to date, after "Rime of the Ancient Mariner" and "Sign of the Cross": Interviewed for Ultimate Guitar on 15 July, guitarist Janick Gers discussed the album's overall sound: "We're taking it to extremes. The one song we released isn't indicative of the rest of the album. There's so many different feels and ways of playing. We go through some different attitudes and take you to different places. There's a lot of thematic tunes and some very varied music." Speaking to Classic Rock in June 2010, Bruce Dickinson stated that "This one is probably the greatest departure from our sound. It's been happening incrementally since Brave New World. That's great, after doing it all for this long, to still be figuring stuff out. We could just be bored by it all, but we're obviously not."

The album's release was met with widespread critical acclaim, with Classic Rock praising it as "densely-layered and substantial," as well as "beautifully paced and disarmingly complex" and "a fresh take on a sound that has admirably withstood three decades of fashions and fads." Kerrang! called it "a record that'll still bowl you over in a decade's time" and MusicRadar stated that "Iron Maiden have created a work full of hypnotic excitement, unconventional structure and dizzying vision...the group have succeeded beyond their wildest dreams." Brave Words & Bloody Knuckles called it "a thrilling and deeply satisfying glimpse into a brave new future for the people’s metal band," while the BBC praised the album as "a remarkable achievement," complimenting the band for "no compromises, just complexities and challenges and more moments of brilliance than perhaps even they thought they still had left in them."

Many reviewers, such as Metal Hammer, deemed it "a demanding album, but one that most Maiden fans are going to absolutely adore." The Quietus commented that "The Final Frontier takes time, it takes effort, but it's overwhelmingly brilliant. They haven’t just served up the easy option – that would have been boring for us and, more importantly you feel, boring for them." PopMatters considered the album "in some ways... the most ambitious album Iron Maiden has ever made, a 76-minute opus."

Many critics commented on where The Final Frontier rates in comparison to the band's past releases, with Consequence of Sound deeming the album "easily the best from the six-piece since 2000’s Brave New World." Allmusic agreed with this, stating that "The Final Frontier still brings Iron Maiden closer to their aesthetic legacy and triumphant year 2000 rebirth than its two predecessors." Blabbermouth.net, on the other hand, praised the album as "better than Brave New World," explaining that "this is the reason Bruce Dickinson and Adrian Smith rejoined the band, the fulfillment of a decade of promise, and arguably the first time that Steve Harris's post-Fear of the Dark cinematic vision has been backed up with consistently strong songwriting, spot-on production, and a fire-in-the-belly performance from the whole band."

The Guardian, however, were more critical of the release, commenting that "with four songs alone clocking in at 40 minutes, The Final Frontier becomes less an exercise in experimentation than old-fashioned endurance, and the hushed-intro-bombastic-chorus dynamic begins to grate a little." Drowned in Sound agreed, commenting that "standards sink fast after ["The Alchemist"], and don't rise again for another half an hour," although going on to add that "the epic 11-minute closer, 'When the Wild Wind Blows' ... shows the subtlety and craftsmanship of the four songs that preceded it, but adds an emotional depth that they seemed to lack."

As of September 2011, the album held a score of 71 at the aggregate review site Metacritic.

Throughout The Final Frontier World Tour, Bruce Dickinson often requested that fans put the album to No. 1 in the respective country's music charts, which it did in 28 countries worldwide. It is the first Iron Maiden release to debut at No. 1 in the United Kingdom charts since 1992's Fear of the Dark, having sold 44,385 copies in its first week. In addition, The Final Frontier debuted at No. 4 in the Billboard 200 with 63,000 units sold, the highest position the band has ever reached in the United States.

By the end of its first week, over 800,000 copies had been shipped to retailers worldwide.