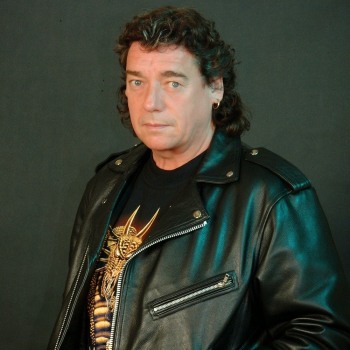 Dennis Stratton (born 9 October 1952 in Canning Town, East London, England) is a guitar player who is best known as a former member of the British band Iron Maiden from October 1979 to October 1980.

Born in Canning Town, London, Dennis Stratton early in life was a promising schoolboy footballer, who was briefly on the books at West Ham United until at the age of 16 he took up playing guitar. A keen fan of the East End music scene, his first serious band was performing with Harvest, who later became Wedgewood. After two years he then formed the locally popular Remus Down Boulevard . "R.D.B." playing to large crowds, touring in support with Rory Gallagher and Status Quo and recording a "live at the Marquee" album with music producer Jonathan King.

Stratton was invited to join Iron Maiden as a second lead guitarist and backing vocalist by Steve Harris after he had seen Stratton playing with Remus Down Boulevard. One of Stratton's earliest filmed appearances with Iron Maiden was in a concert at London's Marquee Club in October 1979. Dennis Stratton participated in the recording and production of the group's first album, Iron Maiden in December 1979. He has also appeared in the home video recording Live At The Ruskin in early 1980 (released in 2004 as part of The Early Days DVD set), Iron Maiden's first video "Women in Uniform," the Women in Uniform single, some subsequent single releases, as well as in the band's first appearance on British TV ("Running Free" performed live on Top of the Pops) and the Live!! +one album. Some concert bootlegs exist including a memorable performance at the 1980 Reading Festival. Stratton was also a member of Iron Maiden during their 1980 European tour, supporting KISS. Dennis Stratton left Iron Maiden in October 1980. Accounts of the reason for Stratton' departure vary; Stratton has mentioned that he left due to conflicts with manager Rod Smallwood and Steve Harris. Both Smallwood and Harris said they rated him as a singer and guitarist. Officially the band stated "musical differences" being the reason for his leaving Stratton was replaced by Adrian Smith.

Since the recording of the band's first album, Stratton has been the only member of Iron Maiden not to have contributed to the writing of any recorded material.

After his departure from Iron Maiden, Stratton played with bands such as Lionheart and, after a NWOBHM tour with them in 1990 joined Praying Mantis, staying to record nine studio albums and two live ones. Stratton officially left Praying Mantis in 2006, although his final recorded material with them was in 2003. In 1995, Stratton had a project with former Iron Maiden singer Paul Di'Anno called "The Original Iron Men" in which both of them sang. They released three albums.

Stratton can still be seen playing in pubs around the East London area and also in Essex. Stratton also performers in a reformed Remus Down Boulevard and often tours Europe with various bands playing classic-era Iron Maiden songs.

Stratton is also endorsed by Caparison Guitars, from his days with Praying Mantis. Live, he uses a Marshall Twin Valvestate combo and a Boss effects/control unit.