No Prayer for the Dying 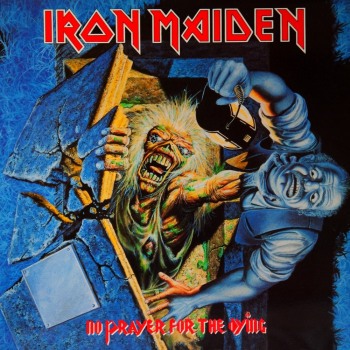 No Prayer for the Dying is the eighth studio album by the British heavy metal band Iron Maiden. The record marks the band's first line-up change since 1983; guitarist Adrian Smith left the band during the pre-production phase, unhappy with the musical direction it was taking, and only having contributed to one song, "Hooks in You". Smith was replaced by Janick Gers, who had previously worked with singer Bruce Dickinson on his first solo-album, Tattooed Millionaire, and had also worked with Ian Gillan and New Wave of British Heavy Metal band, White Spirit.

The album departed from the keyboard and synth saturated progressive rock direction of the band's two previous studio outings (1986's Somewhere in Time and 1988's Seventh Son of a Seventh Son) in favour of a more "stripped down," straight forward style, befitting the band's earlier material, which ushered in a change of vocal style for Bruce Dickinson from the operatic sound of the 1980s to a raspier way of singing. The idea to make a more "street level" release also inspired the band to record in a barn on bassist Steve Harris' property in Essex, using the Rolling Stones Mobile Studio. Dickinson states that this idea was a mistake, commenting that "it was shit! It was a shit-sounding record and I wished we hadn't done it that way. At the time, I was as guilty as anyone else in going, 'Oh great! Look, we're all covered in straw! What a larf!'"

The album also departed from literary and fantasy lyrical themes in favour of more current political content, with songs focusing on religious exploitation (such as in the record's first single, "Holy Smoke") and social concerns ("Public Enema Number One"). No Prayer for the Dying is the only Iron Maiden studio album to date without a song exceeding six minutes in length and the only one to contain profanity in the lyrics. It was also the band's first release with Epic Records in the U.S., after the band left Capitol Records, but was sold through EMI for all territories outside the United States. Despite charting well in most countries, particularly in the UK where it debuted at No. 2, it would be the band's last album to receive gold certification in the U.S.

No Prayer for the Dying also includes the hit song, "Bring Your Daughter... to the Slaughter", which, in spite of a ban by the BBC, remains Iron Maiden's only UK No. 1 single to date. Written by Dickinson and originally recorded with his solo band for the A Nightmare on Elm Street 5: The Dream Child film soundtrack, Steve Harris decided that the song would be "great for Maiden" and had the band rerecord it.

Following Bruce Dickinson's departure from Iron Maiden in 1993, songs from No Prayer for the Dying have been largely ignored at live performances. "Bring Your Daughter... to the Slaughter" was the only song played on a post-1993 set list, appearing on the band's 2003 summer tour.

No Prayer On The Road was the tour in support of the album.

No Prayer for the Dying was the first album not to feature a wrap-around cover since 1983's Piece of Mind. It also does not follow the continuity of previous album covers, as Eddie no longer exhibits either his lobotomy or cyborg enhancements.

Two versions of the cover exist. The original 1990 version has Eddie bursting from his grave and grabbing a grave-digger by the neck. As the band's manager, Rod Smallwood, disliked the figure, he asked artist Derek Riggs to remove him from the cover for the 1998 re-release, although the original artwork is used on the disc itself. Additionally an inscription was added to the plaque on the tomb, which Riggs had initially left blank to allow the band to add their own words, and reads "After the Daylight, The Night of Pain, That is not Dead, Which Can Rise Again." The picture disc LP shows Eddie firing a weapon made of four machine guns (a reference to the album's opening track, "Tailgunner"). It has the original cover on side 2.

Reviews for the album were generally poor, with Allmusic commenting that "the songwriting wasn't up to snuff when compared to such classics as Killers or Number of the Beast" and "as a whole doesn't measure up to the hits." Sputnikmusic were equally negative, stating that "No Prayer for the Dying is a plain, listless record that never really gets itself going."