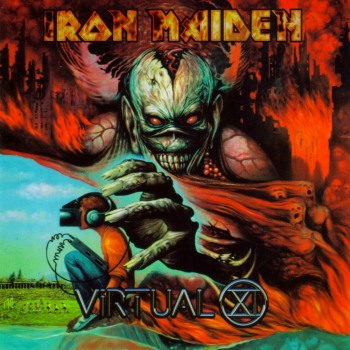 Virtual XI's title tied in with two extra-musical events; the release of the band's computer game, Ed Hunter, and the fact that the 1998 FIFA World Cup would be taking place in June of that year. Harris explains, "We figure our fans are pretty much the same as we are, with pretty much the same interests, so we thought, 'It's World Cup year in '98. Let's get the football involved in the new album.' And we were already working on a computer game at that time, so we thought, 'Well, let's bring that element into things, too.'" Prior to the album's release, the band organised a publicity tour in which they held football matches across Europe with "guest musicians and pro-footballers from the UK."

While most of the artwork in the album's booklet was taken from the Ed Hunter game, the cover was created by Melvyn Grant. According to Grant, he was asked to design something related to virtual reality, but was later asked to alter the artwork by adding a football game, the band then having decided to link the release with the World Cup.

For this album some keyboard parts were performed by band founder/bassist Steve Harris whereas on previous albums all the keyboard parts had been handled by Harris' bass technician, Michael Kenney.

As with their previous world tour, several U.S. shows on the Virtual XI World Tour had to be cancelled as Bayley had vocal issues, although the official reason was instead that he was suffering from a severe allergic reaction to pollen.

This would be the second and final studio album to feature Blaze Bayley. In February 1999, the band had announced that Bruce Dickinson and Adrian Smith, who left in 1993 and 1990 respectively, would be returning to the line-up with Blaze agreeing to leave by mutual consent. He remains on good terms with his former band mates.

Stylistically, Bayley states that Virtual XI "was a more upbeat album [in comparison to its predecessor], because we'd survived the 'X-Factour'... we were a band and, I felt, we were on our way." According to Harris, "Futureal," whose lyrics were written by Bayley, is "about being locked up in virtual reality," and describes it as "a quite straightforward rocker but done Maiden style." The album's second single, manager Rod Smallwood claims that he "had a bit of a battle with Steve" over releasing "Futureal" instead of "The Angel and the Gambler" as the album's lead single, but "Steve put his foot down." According to Harris, "The Angel and the Gambler" "is the story of these two characters, one guy who's been a bit of a rogue, a fly by night, and an angel who gets sent down to try and put him right - except he isn't having it."

Of the album's remaining songs, "Lightning Strikes Twice" is, according to Harris, "a never say never-type song... It's a very positive, hopeful song which you can read in lots of different ways." "The Clansman" was inspired by the film Braveheart which Harris states is "about what it's like to belong to a community that you try and build up and then you have to fight to stop having having taken away from you." Speaking about "When Two Worlds Collide," Harris says that "Lyrically, I think Blaze was trying to write about the different sort of worlds he's lived in and maybe about how his world has had to change and adapt to the world of being Iron Maiden's singer." "The Educated Fool" is, according to Harris, about "growing older and everyone expecting you to be wiser but how somehow the older you get and the more you know, the less you have the answers for any of it." "Don't Look to the Eyes of a Stranger" is inspired by Steve Harris' observation, from a parent's point of view, that "every stranger is a possible threat," while "Como Estais Amigos" is a tribute to the soldiers on both sides in the Falklands War.

After Bruce Dickinson rejoined the band, Iron Maiden continued to play both "Futureal" and "The Clansman" in concert. While "Futureal" only was performed live in 1999, "The Clansman" appeared in the group's setlists until 2003. Live versions of both songs with Dickinson on vocals can be found on "The Wicker Man" single and the Rock in Rio album respectively, while that same live version of "The Clansman" was later re-released on Iron Maiden's 2011 compilation CD From Fear to Eternity.

Blaze Bayley recorded solo versions of "Futureal" and "When Two Worlds Collide" on his live album As Live as It Gets.

The track "The Clansman" was sampled by singer Brandy in her song "I Tried".

Virtual XI was met with mixed reviews from critics. Allmusic commented that "on the surface, there's nothing terribly wrong with the record, as it delivers all the crunching riffs and demonic horror of their best records. The problem is that there's nothing memorable about the hooks, riffs, or songs, and there's little visceral energy to the music or production. As a result, it sounds lifeless to all but the most devoted fan." They also stated that Blaze Bayley is "a competent but faceless vocalist."

Sputnikmusic were more positive towards the album, claiming that it "has a few gems, such as Futureal, The Clansman, and Como Estais Amigos", but is "very repetitive, and listening to it takes a lot of patience."