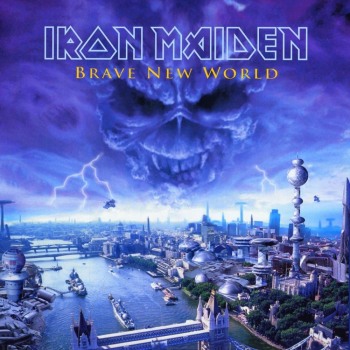 Brave New World is the twelfth studio album by British heavy metal band Iron Maiden, released on 29 May 2000. It was their first studio release since the return of longtime lead singer Bruce Dickinson (who left in 1993) and guitarist Adrian Smith (who left in 1990) in 1999, as well as the band's first studio recording with their current three guitar line-up, as Janick Gers remained with the band.

The album art and title song are references to the novel of the same name, written by Aldous Huxley. The upper half of the artwork was created by Derek Riggs, with the bottom half by digital artist Steve Stone.

The songs "The Wicker Man" and "Out of the Silent Planet" were both released as singles. "The Wicker Man"'s promotional radio release featured extra vocals in the chorus, not present in any other versions of the song.

The Brave New World Tour was the tour in support of the album, during which the show at Rock in Rio was recorded and later released as a live album and video.

Brave New World peaked at No. 7 in the UK Albums Chart, and has since been certified Gold. In the United States, it debuted at No. 39 in Billboard 200, and registered over 307,000 sales on the Nielsen SoundScan system in 2008.

In the 2000 Metal Edge Readers' Choice Awards, the album tied with Pantera's Reinventing the Steel for Album Cover of the Year.

Most of the songs were written before The Ed Hunter Tour and were later recorded at Guillaume Tell Studios, Paris. It was the first album the band would record with producer Kevin Shirley, and the first that they would record live in the studio.

"The Nomad", "Dream of Mirrors", and "The Mercenary" were originally written for Virtual XI, according to an interview with Adrian Smith. There was also a fourth, though neither Adrian Smith nor Steve Harris could remember which it was. Former singer Blaze Bayley also provided lyrics for "Dream of Mirrors", but was never credited.

"Brave New World" was the release's only song to reappear on the Dance of Death World Tour, the next tour in support of a studio release. None of the tracks from the album were played during the A Matter of Life and Death Tour, although many returned throughout The Final Frontier World Tour, with "The Wicker Man", "Ghost of the Navigator", the title track, and "Blood Brothers" being played during the 2010 leg.

The song "Blood Brothers", written by Steve Harris for his late father, was dedicated to Ronnie James Dio throughout the 2010 leg of The Final Frontier World Tour, following his death on 16 May. On the 2011 leg of the tour starting in Australia, "Blood Brothers" would then be dedicated to the victims and friends and family of the band members and audience who were affected by the 2011 Christchurch earthquake on 22 February. As the tour progressed, the song was also dedicated to the victims of the 2011 Tōhoku earthquake and tsunami, as well as the revolts in Egypt and Libya and, later, the victims of the 2011 Norway attacks.

Reviews for the album were generally positive. Critics were especially warm towards the return of Bruce Dickinson and Adrian Smith to the band compared to the previous two releases which featured Blaze Bayley on vocals. Kerrang! described it as "truly towering. Majestic. Bombastic. Titanic. So gloriously in-yer-face you can almost feel its hot breath up your nostrils." Sputnikmusic described it as "one of the band's top albums; along side the likes of Powerslave, Somewhere in Time, and Piece of Mind" and "definitely the easiest album to get into since the band's glory days." Classic Rock stated that, while "it may not take too many strides forward," it "certainly succeeds in reeling back the years to Iron Maiden's heyday."

Allmusic were slightly more critical of the album, describing it as "no Number of the Beast," although going on to say that "as comeback albums go, its excellence was undeniable," and likewise giving the album a positive rating.