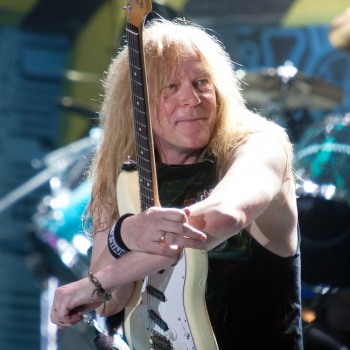 Janick Robert Gers (born 27 January 1957) is an English musician, best known for being one of the three current guitarists in Iron Maiden, along with Dave Murray and Adrian Smith, as well as his earlier work with Gillan and White Spirit.

Janick Gers began his career as the lead guitarist of the New Wave of British Heavy Metal band White Spirit, before joining Gillan, a group formed by former Deep Purple vocalist Ian Gillan. After Gillan disbanded, Gers undertook a Humanities degree before joining Gogmagog, which included former Iron Maiden vocalist Paul Di'Anno and drummer Clive Burr. The project came to nothing, however, and Gers went on to work with Marillion vocalist Fish before being asked to record a song called "Bring Your Daughter... to the Slaughter" with Iron Maiden vocalist Bruce Dickinson. The project expanded into an album, Tattooed Millionaire, and during its recording Gers was asked to join Iron Maiden in place of Adrian Smith. He has remained with the band ever since, even after Smith rejoined the band in 1999, contributing to a total of eight studio albums.

Gers' main influences are Ritchie Blackmore, Jeff Beck and Irish blues guitarist Rory Gallagher. He is noted for his energetic stage presence, which often involves performing tricks with his guitar, such as throwing it into the air and catching it. He is also left-handed although he plays guitar right-handed; he can be seen signing autographs with his left hand in the Rock in Rio DVD.

He has two children with his wife Sandra, Sian and Dylan Gers, and lives in Yarm, Teesside. His father, Bolesław, was an officer of the Polish Navy before he came to England and joined the Royal Navy.

Gers had an uncredited part in the BBC drama The Paradise Club in 1990, appearing as the lead guitarist of a band called Fraud Squad. He appeared in the 2010 fan-made Iron Maiden documentary Maiden Heaven.

Gers is a long-time proponent of the Fender Stratocaster. His guitars are typically black or white with rosewood fingerboards and Seymour Duncan JB Jr. and Hot Rails pickups. His favourite guitar over the years has been a black Stratocaster, equipped with JB Jr. pickups, which was given to him by Ian Gillan. Gers uses four different Fender Stratocasters, as well as a Gibson Chet Atkins semi-acoustic model for songs such as "Dance of Death". Gers is currently endorsed by Sandberg Guitars, and he uses a California ST-S tobacco hc-aged and a California ST-S creme hc-aged model on stage.

Like his bandmates, Dave Murray and Adrian Smith, Gers currently uses the Marshall JMP-1 preamp through a Marshall 9200 power amp. Preferring not to use foot-switches while playing, Gers' roadie operates his MIDI Foot Controller offstage. Favouring cables, Gers only uses a Shure UR4D wireless system when he throws his guitar around. He uses Ernie Ball Regular Slinky Nickel-wound guitar strings, although he does not use the B strings.