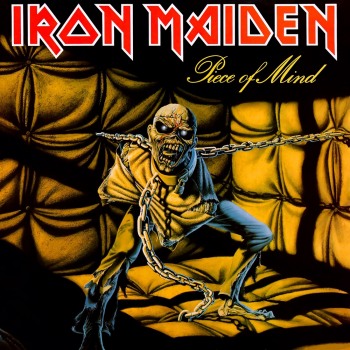 Piece of Mind is the fourth studio album by British heavy metal band Iron Maiden. It was originally released in 1983 (see 1983 in music) on EMI, and on Capitol in the U.S.; it was reissued later on Sanctuary/Columbia Records. It was the first album to feature drummer Nicko McBrain, who had recently left the Paris-based band Trust and has been Iron Maiden's drummer ever since.

The album ranked 21 on IGN's list of the top 25 metal albums.

In 1983, Kerrang! magazine published a poll of the greatest metal albums of all time, with Piece of Mind ranking number 1, and with The Number of the Beast at number 2.

Lyrically, the album reflected the group's literary interests, such as "To Tame a Land," based on Frank Herbert's science fiction novel Dune, and "The Trooper," inspired by Tennyson's Charge of the Light Brigade, as well as film, such as "Where Eagles Dare", a film by Brian G. Hutton, and screenplay & novel by Alistair MacLean, and "Quest for Fire", based on the film by Jean-Jacques Annaud. On top of this, the writer G. K. Chesterton is quoted at the beginning of "Revelations". More exotic influences include Greek mythology, albeit slightly altered for "Flight of Icarus". Aleister Crowley influenced a good piece of the remaining lyrics of "Revelations", which was written by Dickinson.

This is the first of four Iron Maiden albums that were not named after a song featured on the album itself (though the words "peace of mind" appear prominently in the album's sixth song, "Still Life"). Originally, the release's working title was Food for Thought, once the band had decided that Eddie would be lobotomised on the front cover, until the band came up with the title Piece of Mind in a pub in Jersey, during the album's writing stage. The name of the last track was meant to be entitled Dune, but, after seeking permission to do so via Frank Herbert's agents, the band received a message which stated, "Frank Herbert doesn't like rock bands, particularly heavy rock bands, and especially bands like Iron Maiden."

Included in the liner notes is a slightly altered version of a passage from the Book of Revelation, which reads:

And God shall wipe away all tears from their eyes; and there shall be no more Death. Neither sorrow, nor crying. Neither shall there be any more brain; for the former things are passed away.

The actual text (from Chapter 21, Verse 4) is nearly identical, except that it says "neither shall there be any more pain", rather than brain, which was added as a pun on the album's title.

In a lower corner on the back side of the album cover, there is this message: "No synthesizers or ulterior motives".

World Piece Tour was the tour in support of the album.

At the beginning of the sixth track, "Still Life", the band included a hidden message which could only be understood by playing the album backwards. This was a joke and an intended swing back at the critics who had accused Iron Maiden of being Satanic. The backwards-message features Nicko McBrain mimicking Idi Amin (or rather mimicking John Bird mimicking Idi Amin) uttering the following phrase "What ho said the t'ing with the three 'bonce', do not meddle with things you don't understand...", followed by a belch. The phrase itself is taken from the satirical album The Collected Broadcasts of Idi Amin by Bird and Alan Coren. "What ho" and "What ho said the t'ing" are phrases that also crop up regularly on McBrain's "Listen With Nicko!" tracks from The First Ten Years collection.

According to McBrain, "We were sick and tired of being labelled as Devil worshippers and all this bollocks by these fucking morons in the States, so we thought, 'Right, you want to take the piss? We'll show you how to take the bleeding piss, my son!' And one of the boys taped me in the middle of this Idi Amin routine I used to do when I'd had a few drinks. I remember it distinctly ended with the words, 'Don't meddle wid t'ings yo don't understand.' We thought, if people were going to be stupid about this sort of thing, we might as well give them something to be really stupid about, you know?"

Two songs were covered for the 2008 tribute album Maiden Heaven: A Tribute to Iron Maiden; "The Trooper" by Coheed and Cambria and "To Tame a Land" by Dream Theater.

"Where Eagles Dare" has been covered by Bethlehem (translated into German as "Wo Adlers wagen" on the Limited Edition version of Dictius Te Necare) and Fozzy on their second album, Happenstance, in 2002. Fozzy has also covered "The Prisoner" (from The Number of the Beast) on their debut, Fozzy.

"Die with Your Boots On" has been covered by Sonata Arctica.