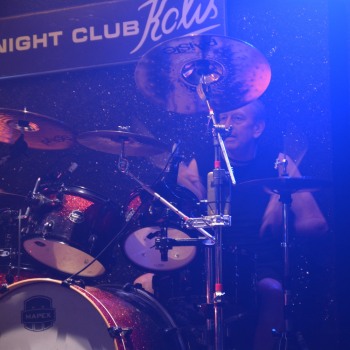 Prior to joining the band, Sampson was a member of one of Steve Harris' previous groups, Smiler, in 1975, after which he was asked to join Iron Maiden at their inception in the same year. He declined to join at the time as he was "a bit fed up with the whole rock band thing" because he was "completely skint," but accepted a further invitation in November 1977 after he had taken up drumming again in a group called Janski.

Following a year of playing small pubs with the band, during which they gained a small following, he participated in the recording of Iron Maiden's demo, later released as The Soundhouse Tapes, on 31 December 1978, some tracks from which appeared in the charts of Neal Kay's Heavy Metal Soundhouse club, published weekly in Sounds. Iron Maiden eventually signed to EMI in 1979, following which they undertook two failed attempts at recording their debut album, although one song from these sessions ("Burning Ambition") was included on the B-Side of "Running Free".

Sampson eventually left the band on 22 December 1979, following health issues brought about by the band's extensive touring schedule, and was replaced by Clive Burr four days later. Although he calls it "a blow," he states that "the truth is, I don't think I could have handled it, so maybe it turned out for the best." Although he would form other bands, Sampson has never played professionally since his time with Iron Maiden, after which he ran an off-licence before becoming a forklift driver.