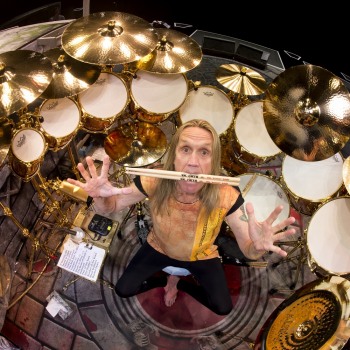 Michael Henry McBrain (born 5 June 1952) is an English musician, best known as the drummer of the British heavy metal band Iron Maiden, which he joined in 1982.

Having played in small pub bands from the age of 14, upon leaving school McBrain paid his bills with session work before he joined a variety of artists, such as Streetwalkers, Pat Travers, and the French political band, Trust. He joined Iron Maiden in time to debut on their fourth album, Piece of Mind (1983), and has remained with them since, contributing to a total of twelve studio releases.

McBrain first wanted to learn the drums at a young age after watching Joe Morello performing with The Dave Brubeck Quartet on television. At the age of ten, he started to play drums with pots, pans and other kitchen utensils, before, to his parents' dismay, he began drumming on the gas cooker with a pair of knives and chipped off the paintwork. McBrain recalls that he was eleven or twelve before his father bought him his first drum kit, "which was basically one snare, one tom-tom, one cymbal, two drumsticks and a pair of brushes." He soon started playing The Rolling Stones and The Beatles covers with school bands, before he began regularly playing "pubs and weddings" by the age of 14.

Upon leaving school, McBrain paid his rent by undertaking session work, before deciding to join his first "proper" band, "The 18th Fairfield Walk", later known as "Peyton Bond". A small pub band, which he decided was "never gonna go anywhere" as they only performed Otis Redding, The Beatles and The Who covers, McBrain soon left to join "The Wells Street Blues Band", which renamed themselves "The Axe" in 1969. Although this group would play their own material, the band split up after an argument between the singer and the guitarist, and McBrain began playing with Billy Day, a singer and keyboardist, and Michael "Mickey" Lesley, a guitarist, in 1971. At that point, he was known as "Nicky", a nickname given to him by his parents after his teddy bear, Nicholas, until an intoxicated Billy Day introduced him to Dick Asher, head of CBS Records, as "Neeko", while they were recording at CBS Studios, Whitfield Street. McBrain liked the name, changing it to Nicko "so that it sounded more English," and decided to keep it even after leaving the group.

In 1975, he began playing with Streetwalkers, before joining Pat Travers and then the French band, Trust, with whom he met Iron Maiden for the first time, while touring together in 1981. In 1982, the band asked McBrain to replace their previous drummer, Clive Burr, and, as news of Burr's departure had not yet been announced, made his first appearance with Iron Maiden on German TV disguised as Eddie. He formed a close partnership with bassist, Steve Harris, and completed what many critics consider the band's "definitive" lineup, releasing a series of gold and platinum selling albums throughout the 1980s.

Although the band's lineup altered drastically in the 1990s, McBrain remained in Iron Maiden and, since the return of Adrian Smith and Bruce Dickinson in 1999, the group has undergone a resurgence in popularity, and are now considered by some as "bigger than ever".

Although he writes the drum parts for all the band's songs, McBrain registered his first and only album songwriting credit for "New Frontier," from 2003's Dance of Death, which expresses his opposition to human cloning, arising from his religious beliefs. However, McBrain had earlier received two more songwriting credits for non-album songs. In 1984, he was credited as a co-writer (along with Steve Harris) of the track "Mission From 'Arry" (the B-side of "2 Minutes to Midnight" single), which was actually a recording of a backstage argument between the two. In 1992, McBrain received another songwriting credit, for the song "Nodding Donkey Blues", which appeared as the B-side of the single "Be Quick or Be Dead".

McBrain's drumming has been an important element of Iron Maiden's sound from 1983's Piece of Mind onwards, with guitarist Adrian Smith remarking that, "he always had the chops and the technique, but in Maiden he really exploded, to the point where a lot of stuff we did after he joined was then founded on his playing, all those busy patterns he does, displaying tremendous technique." As described in detail on the band's 2004 The Early Days documentary, the opening track of "Where Eagles Dare" famously displays McBrain's ability to use the single drum pedal very quickly, plus his rapid tom fills.

He is often considered among the best and most influential heavy metal drummers. In the 2008 Live After Death DVD, Steve Gadd, McBrain's then drum technician, comments that, on the World Slavery Tour, drummers such as Tommy Lee would refer to McBrain as an 'octopus' after witnessing the way in which his stamina gives him the ability to use all of his large signature drum kit in concert.

McBrain often employs the back end of his left hand drum stick to allow for more powerful "snare hits". He is known for not using a double bass pedal, with Bruce Dickinson commenting that he refused to use one on "Where Eagles Dare", considering them 'undrummerish'. He claims to have only ever used a double pedal once on "Face in the Sand", from Dance of Death, preferring to use a DW 5000 Accelerator single pedal. Since switching to the DW pedal in 2000, McBrain plays barefoot, stating that it gives him "more freedom."

Steve Harris remarks that "...he can play all kinds of music. Drummers from other bands sit round the back of him to see what he’s doing, but he’s got his kit set so he doesn't even look at what he's hitting half the time" After McBrain joined the band in 1982, Harris also noted how much easier playing with McBrain was for a songwriter, with Adrian Smith claiming that, "Steve loves playing with him. [They] used to work for hours going over these bass and drum patterns."

McBrain currently uses Premier drums and Paiste cymbals. For A Matter of Life and Death he used his Ludwig metal shell LM 402 snare drum which was purchased in 1975, making it the oldest drum in his kit. He endorses Vic Firth signature drum sticks, also using them for his own drumming.

McBrain's drum kit and cymbals do not bear the standard Premier and Paiste logos. They are labelled with the brand name using the Iron Maiden logo font.

McBrain converted to Christianity in 1999 after an experience in the Spanish River Church, near his Boca Raton, Florida home. His wife, Rebecca (from Whitman, West Virginia), had been asking him to attend with her, and upon entering the church, McBrain soon found himself crying as he experienced a "calling". Recounting the tale, he said "I just sat there thinking, 'I didn't drink last night…why can't I stand?' I had this love affair with Jesus going on in my heart."

In an interview, McBrain was asked if he felt it was appropriate to be a member of Iron Maiden in light of his Christian views. He responded by saying, “When you become a Christian, you don’t become sinless. The idea is to sin less. We’re all sinners. We’re never going to be clean till the day the good Lord is standing in front and judgement comes. But to me, I try to live my life. I do fall off, and occasionally I fall off hard and I have to get down on my knees and beg forgiveness. So it’s not an easy ride, and it’s not professed to be either.” He was also asked if he shared his religious views with his band mates, and if so, how they felt about it. McBrain responded, “We’ve had some incredibly deep conversations amongst each of us. I can’t say to you that I’m trying to convert all these guys in my band to be Christians. I’m leading them on my route, and if they choose to follow what God’s plan is in the Bible, that’s up to them. I say to them all, you know, look, in my belief, at the moment, if you turn to your saviour Jesus Christ, I’ll have eternal life in Heaven with you! … We don’t talk about it every time we get together, but we’ve had some interesting conversations over the years.”

In 1988, McBrain appeared as a guest on the The Sooty Show, in which he played drums with Sooty and Sweep. In reference to his appearance on the show, McBrain's drum kit has since been decorated with a Sooty puppet, which is often dressed accordingly with the band's corresponding tours. He also has a pilot's license, for which he has a twin engine rating, and in 2009 opened a restaurant called Rock 'N' Roll Ribs in Coral Springs, Florida. The restaurant received positive reviews on an episode of Check, Please! South Florida and was awarded "Best Ribs of 2012" by New Times Broward-Palm Beach. In 2003, McBrain was arrested for allegedly striking a parking attendant with his car after refusing to let him into the Jones Beach Theatre in Wantagh, New York, where Iron Maiden were due to play a concert. In 2007, he received a six month driving ban and a fine of £500 after he was caught speeding at 116 mph on the M74 motorway near Lockerbie. McBrain has two sons: Nicholas (born 1983) and Justin (born 1992).