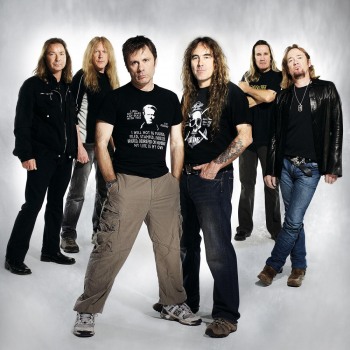 Alongside the live show, there is a bonus disc featuring an 88-minute documentary  Behind The Beast giving a behind-the-scenes look at exactly what is involved in putting on an IRON MAIDEN concert.  Secondly, in June, the MAIDEN ENGLAND WORLD TOUR gets underway. This highly anticipated tour is the next chapter in the History Of Iron Maiden and will closely follow 1988’s Seventh Son Of A Seventh Son Tour not only in choice of set list but also in production and content. The 2012 dates will be the opening leg of this World tour and will be the band’s most extensive visit to North America in many years. The band show no signs of slowing down or losing the formidable passion that has seen them triumphant at the forefront of Metal for three decades.

Founded by bassist Steve Harris in the mid ‘70s, Iron Maiden were already firmly established as heavy metal’s brightest hopes when they stormed the world with their third album (and first with vocalist Bruce Dickinson) The Number Of The Beast in 1982. Throughout the decade that followed, Maiden recorded and toured relentlessly with seven new studio albums and seven World Tours in the ‘80s alone. Cementing their reputation as the hardest-touring  band on the planet and with the unmistakable figure of band mascot Eddie adorning every album cover and T-shirt , Iron Maiden created a world of their own; one that welcomed fans from every culture, creed and social sphere with a guarantee of heartfelt conviction and unprecedented professionalism.

With milestones like the marathon World Slavery Tour of 1984/5, headlining Rock in Rio in both 1985 and 2001 and Castle Donington’s Monsters Of Rock festival in 1988, (still the biggest ever event there with 107,000 attending), Maiden set new standards, while continually reinventing themselves both musically and visually.

Despite radio play around the world being limited to occasional heavy metal speciality shows and the band’s refusal to deal with celebrity and lifestyle-based mainstream media and magazines, of which there are now so many, the band took metal to many new frontiers; to Poland and behind the Iron Curtain in 1985,  around South America initially in 1992 and many times since, to the Middle East in 2007, India in the same year and many other new places all around the planet that rarely get visited by major bands.

The ‘90s proved to be a difficult time for heavy metal bands in general, but Iron Maiden ploughed doggedly forward, notching up yet more success with albums like 1992’s acclaimed Fear Of The Dark and even weathering the departure of Bruce Dickinson in 1993. The band made two strong albums with new singer Blaze Bayley and continued to honour their commitment to intensive touring, delivering the goods at every show. However, it was the return of Dickinson and guitarist Adrian Smith (who originally left the band in 1990) in 1999 when  Iron Maiden became a six-piece, that established the ultimate Iron Maiden line-up of Bruce Dickinson on vocals, Steve Harris on bass, Nicko McBrain on drums and “the three amigos” – Adrian Smith, Dave Murray and Janick Gers - on guitar. This line-up has scaled new heights and become increasingly fearless and boldly creative since the release of the Brave New World album in 2000.

With both 2003’s diverse and ingenious Dance Of Death album and its dark and daring follow-up, 2006’s A Matter Of Life And Death, they dazzled fans and critics alike. With each successive tour, whether revisiting classic songs from their first few albums or playing A Matter Of Life And Death in its entirety, Maiden accrued countless new young admirers, momentum building all the while.

This brave new Maiden era reached an astonishing zenith during the band’s Somewhere Back In Time Tour that began in February 2008 and initially took the band 50,000 miles around the world in 45 days, flying in their own specially chartered Boeing 757, Ed Force One, piloted by Bruce Dickinson, a qualified airline captain, traversing the planet, from India to Costa Rica, Australia to Argentina, Sao Paulo to Tokyo. Ed Force One made TV news headlines around the world and the coverage of that tour was subsequently turned into an award-winning film and DVD Flight 666.  Released in 2009 Flight 666 hit the No.1 slot in the music DVD charts in 25 countries, the same year the band picked up their first ever Brit Award for Best British Live Act. Maiden guitarist Dave Murray summed it up nicely when he remarked “Ed Force One certainly beats the battered old van that we, our one crew member and all our equipment used to travel round to gigs in when we first started out!”

The overwhelming success of the Somewhere Back In Time Tour continued into 2009 with sell-out shows across Europe and North America, and convinced the band that Ed Force One was the best possible way to reach more fans, more quickly and in more territories then they could ever hope to visit by traditional touring methods.

2011 proved another landmark year in the career of IRON MAIDEN following on from the huge success of their 15th studio album The Final Frontier released in 2010. The album became their biggest chart success to date, hitting the number one spot in 28 countries round the world, and debuting at an all time high of  #4 on Billboard in the U.S.  In February the band resumed The Final Frontier World Tour which had begun in June 2010, once more aboard Ed Force One, and pushing their own boundaries even further on that particular Round The World odyssey which covered 5 continents in 66 days and saw the band fly for the first time ever into such places as Singapore, Indonesia and South Korea for shows there. By the end of The Final Frontier Tour the band had played 98 live shows to over two million fans in 36 countries finishing up with two triumphant concerts at London’s 02 Arena. This same year Maiden released the widely lauded From Fear To Eternity compilation album and the band were also awarded their first ever U.S. Grammy:  Best Metal Performance, for the song El Dorado taken from The Final Frontier album.

32 years on, and with over 80 million album sales, more than 2000 live performances, countless satisfied customers and 15 studio albums of unerring quality and power to their name, Iron Maiden have more than earned their proudly-held status as one of the most influential and revered bands ever.