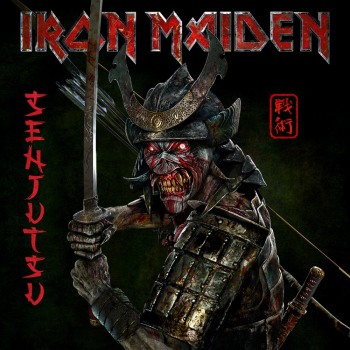 The last time we caught new material from Iron Maiden was in August 2015. Six years and a few days later I will start my review with exactly the same words I used then.

Listening to a new Iron Maiden album for the first time, every time (as long as I can remember) is something that marks me. We remember the breaking news forever, right?

What I did when the record store opened that morning and I got The X Factor in my hands. What I did when I heard the first notes of Futureal. The first time I saw Steve Harris up close. My face in the first notes of The Wicker Man. What I was discussing before I read that Clive passed away. So today one is thrown into the chat: Do you have what's app, the logical cancellation of an appointment has come and another memory enters my personal collection.

Below you will read a very detailed, 1000% subjective review, for the upcoming album of the largest band in the world. It's my opinion and that 's why I're signing this article - I do not need and do not want to share my excitement, but an Iron Maiden release and especially after six blank record years make me what you're going to read.

A slow introduction, drums of war, imposing sounds and Bruce at his best, a riff that we are not used to and will definitely set up an imposing entrance of the band in the concert hall. We certainly have not learned in eight minutes of introductory album songs, but the harmonious refrain travels and calms us. Progressive sounds, dynamic rhythms, welcome to Senjutsu!

The gallop, in which we hear the leader plowing the stage, melodies that follow the voices and a magical song begins with the album. Easy opener and to be honest, it strikes me that it is not the first song. Concert vocals and classical Maiden rhythm song structure, but we know that, so we move quickly to the next ones.

The first song that our favorite band revealed to us almost a month ago and it certainly surprised most of us, especially with the storytelling game that was made with the Belshazzar's Feast posters. A song that we are not really used to, but it is definitely the best video production of the band, I would say after The Wicker Man. Have you seen the riders on the storm?

Somewhere here Harris takes his bass and starts one of four songs he has written exclusively. I would say a weak choice, up to the middle especially, but then the melodic parts and the dilemmas that we have loved begin. Personal assessment after several recordings of the album (without it having matured naturally in my ears), is by far the weakest. But time may disprove me. It strongly reminds me of The Great Unknown from The Book of Souls, a great song, but it never managed to win me over.

Uptempo song from Bruce Dickinson's solo career, somewhere between The Chemical Wedding and Tyranny of Souls. To be honest I think they quarreled with Steve during the recordings in Paris for his duration. The songs are so great, justifiably great, that I believe that Days of Future Past does not manage to build its history. Fast, rhythmic and logically we will admire it in a few months live.

From the recordings of The Final Frontier, a sound reminiscent of The Talisman, a classic structure with a special rhythm, The Time Machine, I think it loses in the verse and gains ground in the choruses. In three minutes they decide to put on the most beautiful rhythmic solos from The X Factor and convert the song so simply. Wonderful solo changes, excellent performance from everyone and fantastic drums complete the special The Time Machine.

A classic sound that brings to mind Dance of Death, with Bruce delivering performance lessons, in one of the most theatrical songs that our favorite band has ever offered us. Imagine Coming Home meeting Journeyman with a ballad note from Accident of Birth. I think the band had a great need for such a quality song at this very pace. The Darkest Hour is a song that you hear for the first time and you feel beautiful because you have heard it before. Personal opinion, the best solo of the album.

Second song through Harris mind and here we are really impressed by the structure and the basic melody. While reminiscent of the beginning, the middle and the end, the Iron Maiden we know, he repeats the themes many times, without tiring for a moment. Bruce is giving a recital again on a song that we did not expect to have the band's label and he definitely wants more auditions to become familiar to the ear. It 's a track that while it' s so Iron Maiden, it has a character of its own and I think it's the most atmospheric song on the upcoming tour.

From the Far East to the Dark Powerslave, a journey with unique melodies and classic Maiden solos alternations. The Parchment is in many ways reminiscent of Alexander The Great, in sound, in structure, in its measurements, a journey song. Shortly before the seventh minute the song changes drastically and from all mysticism and journey makes a magical transition to a modern structure, as the lead guitar faithfully follows the voice of Bruce, which has suddenly become extremely clear and instructive. If there's one thing I never get over in my life, it's the Harris bass gallop and the dilemmas that make me shudder from a young age.

There is no room for fans here. Hands down, Hell on Earth is the best song on the album in the first listenings as it flattens you from the first listen. The strongest song, the strongest structure, a song that hangs on the wall and leaves you no time to calm down. Eleven minutes, where just over the first two build a hurricane coming. An introduction reminiscent of the band's dark, The X Factor, with signs of When the Wild Wind Blows and suddenly a melody from nowhere to travel us. The rest is history ...

The band had locked Senjutsu in their closet well hidden for two years. Well done obviously, because the magic would have been lost. Two days before the official release, practically as soon as the distribution started, the album is in the hands of fans everywhere, offering smiles and beautiful notes to our speakers. Seventeen albums later I have to say again: Maiden only!