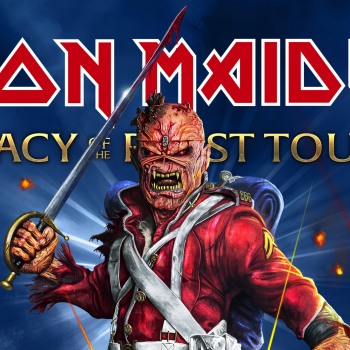 Four more shows are announced in Europe for the 2021 final leg of the Legacy Of The Beast Tour. St Jakobshalle in Basel, Switzerland on June 5 will now be the opening show on this the final run of the Legacy tour.

Shows will follow in Zagreb Arena, Croatia on June 7,  Groupama Arena, Budapest, Hungary on June 9 plus a further stadium show in Germany at Deutsche Bank Park, Frankfurt on July 6. The timing of the ticket on-sales for these four shows will be posted once decided.

Supports for the Switzerland, Croatia and Hungary shows will be Lord Of The Lost. Special Guests at the Frankfurt show will be Sabaton plus Airbourne.

Additionally, we will be announcing ticket on-sale dates for the previously announced shows in Belgium and The Netherlands at a later time. However support at these shows is now confirmed as Special Guests Avatar and Lord Of The Lost at Sportpaleis, Antwerp on June 27 and Special Guest Amon Amarth at the Gelredome, Arnhem on July 10 in addition to the already announced Airbourne.

This completes the Legacy Of The Beast Summer 2021 touring schedule and no further dates will be added. As always there will be an exclusive pre-sale for Iron Maiden fan club members at the appropriate time.

The full list of 2021 LOTB tour dates and supports at each show can be found here.