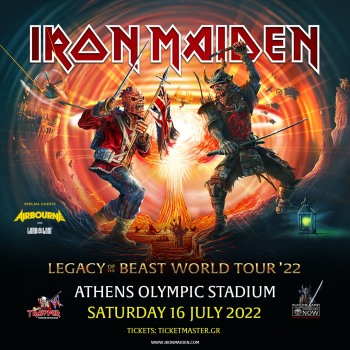 Iron Maiden announced 6 more European shows of the "Legacy of the Beast World Tour 2022", including an appearance in Greece at the Olympic Stadium in Athens on July 16, 2022.

The show that received the most rave reviews in the world is coming to Greece with an audiovisual spectacle that we have never seen before!

IRON MAIDEN added six more European dates to the "Legacy Of The Beast 2022" tour, including the Olympic Stadium in Athens on July 16. Ticket pre-sale starts on December 4 at 10 a.m. As always, there will be an exclusive presale for Iron Maiden fan club members. Special guests at the concert will be Airbourne and support act Lord of The Lost.

This show has already been seen by almost two million people around the world and has been embraced by fans and the media, as it is the most spectacular show in the band so far, with a set list of favorite songs from previous decades . The 2022 show will also have a small taste of Maiden's new studio album "Senjutsu" - which debuted at # 1 in Greece and is being played live for the first time.

According to the band's manager, Rod Smallwood,

"Next summer we will finally be able to have the huge European Legacy of the Beast tour in stages, which was originally set for 2020 and has since changed its date twice! We are very happy to be able to add concerts to some of the most important countries in Eastern Europe, including Ukraine, where we have never performed. We will make some changes to the production and setlist to add some songs from the new album "Senjutsu" and we plan to make the Legacy of the Beast tour more spectacular than the original show, but you can be sure that we will include all its elements home tour and our favorite Maiden songs. We will enjoy on stage the Spitfire plane, Icarus and a spectacular and impressive show with fires and fireworks. However, we will try to shake you a little, since now our favorite Trooper Eddie will have serious competition in a new "Senjutsu world" which we will add to the scenes ".

"We are looking forward to our concert return to Europe next year and it is wonderful that we can add Athens, but also the rest of the shows in Eastern European cities where there are thousands of Maiden fans. I'm really excited about the new additions to the tour where an impressive spectacle will take place, which is why we look forward to seeing what we have prepared for them. All of us in the band enjoyed the Legacy tour for this and we are looking forward to the moment when we will be out on the street again and have fun with all our fans that we have so long to see! "

The full list of new dates added to the European Tour is as follows:

For a full list of Legacy Of The Beast 2022 Tour European station dates, follow the link www.ironmaiden.com

The production and setlist of The Legacy of the Beast tour are inspired by the award-winning free mobile game of Iron Maiden which is available for anyone who wants to download it on iOS and Android platforms via www. ironmaiden.com/play.

* The general pre-sale of tickets for the magnificent return of Iron Maiden will start on Saturday, December 4 at 10:00 am, while only the members of the Fan Club of the band will be able to purchase their tickets from Friday, December 3 at 10 : 00 π.μ.