Steve Harris: Solo debut is not the progressive rock some might expect 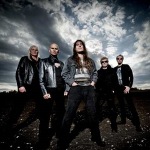 IRON MAIDEN founder Steve Harris' debut solo/side project album, "British Lion", will be released in the U.S. on September 25 via Universal Music Enterprises (UMe). Mixed by Kevin Shirley — whose credits include IRON MAIDEN as well as Led ZEPPELIN, JOURNEY and RUSH, among many others — the CD, which features Harris alongside vocalist Richard Taylor, guitarists Graham Leslie and David Hawkins and drummer Simon Dawson, presents a different side of the bassist's musical visions.

Asked where the impetus for "British Lion" came from, Harris told Classic Rock magazine, "How it started was that Graham Leslie came to me with a cassette of songs — which shows how long ago it was! — and I thought they were really good, so I said I'd try to help his band do something. I ended up managing them and producing them and writing with them, although I kept that fact under wraps, to the point where even some people in the band didn't know. Anyway, when that band imploded I thought, 'Well, I've got to do something with this,' because I thought the songs were so strong."

He continued, "Over the years I've kept in touch with Richie and Graham, and then Richie was working with another guitarist called David Hawkins, who's a really talented guy, and so we started writing songs together. So on the album there are six songs written with Richie and David, there's one with just me and Richie, and the others are me, Richie, Graham and a couple of other guys that were around at the time."

"British Lion" comprises ten songs that Steve and his collaborators have been working on between IRON MAIDEN tours and releases and is described by Harris as "'70s-influenced, British-sounding hard rock." "I'd say it's more mainstream rock than metal... and quite commercial… but good commercial," he said. "There's all kinds of stuff going on, with nods to THE WHO and UFO and some classic British rock bands, but it's not the progressive rock album some might be expecting."

On the topic of why this is the right time for a Steve Harris solo album, the IRON MAIDEN bassist told Classic Rock, "Because it's ready, it's finally, finally ready. The guys have been waiting very patiently for years for me, and it's been frustrating at time, but what can I do?! I'm so busy with MAIDEN. People have already said to me, 'Are you going to do this instead of MAIDEN?' and I'm like, 'Of course not!' MAIDEN is always going to be the priority — always has been and always will be — but it's interesting and exciting to try new things."

He added, "On the early [IRON MAIDEN] albums, most of the songs are mine, but as we've gone into different eras with different people writing, there's been more and more collaborations. And I think it's been important for MAIDEN to do that rather than have me dictating everything. But I have bags full of ideas, so many that I couldn't record them all in my lifetime, and I tried out a few different things on this, because I had the time to do experiment."