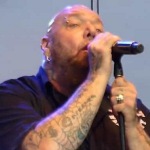 Video footage of former IRON MAIDEN singer Paul Di'Anno's August 25 performance at the Rock Knights Festival in Larzac, France can be seen below. Due to a number of health issues, including a knee problem which will require surgery soon, Di'Anno announced in July that he will stop touring next year.

In a message posted on his Facebook page, Paul stated about his impending retirement from performing, "To all of you who have been with me from the start, and many new friends who have given me the privilege of being able to play and meet so many of you through the years, I can't find the right words to tell you all how much I'll miss you. All of you have my love and respect forever, and anyone who knows me knows that ain't a load of bollocks you have kept me going through difficult times, happy times and a lot of heartbreak. I thank you all with all my heart and I'm glad you're not here right now watching me write this crying like a big Jessie (for you, mates, it means a wuss!). Thank you all again, I love you all and wish you all health, good fortune, and most of all, love and happiness. You will be with me always. Thank you, thank you, thank you. Timao Corinthians n again te amo simper. Love, Paul."

Michael Salenius, Di'Anno's Swedish booking manager and tour manager, told BLABBERMOUTH.NET that next year will be "a big, fantastic" last touring year for Paul, with a lot of solo shows, festival appearances and Di'Anno vs. Blaze Bayley concerts. You will also see various guest musicians joining Paul on stage.

Di'Anno recorded two classic albums with IRON MAIDEN before being fired and replaced by Bruce Dickinson. He went on to front a number of other bands, including KILLERS and BATTLEZONE, and released several solo records.

On August 27, 2011, Di'Anno played his first show since serving time in a U.K. prison after he falsely collected U.K. government benefits by claiming he suffered nerve damage to his back that prevented him from working.

After serving his jail term in early 2011, Di'Anno issued a short statement in which he thanked his fans for their support and claimed that he "managed not to drop the soap" during his stint behind bars.

Di'Anno completed his first North American tour in early 2010, 17 years after he was deported following a prison term for guns and drug offenses.