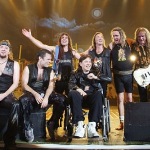 British heavy metal legends IRON MAIDEN established the Clive Burr MS Trust Fund in 2002 to benefit their former drummer, Clive Burr, who is suffering from multiple sclerosis — a disease of unknown cause. The disorder is causing him intermittent numbness and can affect his balance.

At present there is no known cure for MS, although he is helping test new drugs in the hope that his body response may contribute to a cure.

There is no longer a web site or readily available information on The Clive Burr MS Trust, but the band continues to raise money for it periodically.

"The fans know about it and they contribute to it, and every now and again we'll do a show and just donate all the money," MAIDEN bassist Steve Harris tells SamaritanMag.com. "When we need to top it up, we do something."

Another person that benefited from the fund was Harris's childhood friend Ralph, who was given a modified vehicle able to carry his wheelchair.

"We went to school with him, my oldest friend since I was 5 years old, so we helped him, but we don't normally talk too much about it," the bassist said.

"Some of them get [MS] very mildly," Harris added, "but unfortunately the friend I was talking about has it really really bad. He's in a wheelchair for a long time and Clive is getting worse."

Clive joined IRON MAIDEN at the very end of December 1979 and played on the first three albums — "Iron Maiden", "Killers" and "Number Of The Beast" — and toured extensively with the band over this groundbreaking period before leaving in early 1983.