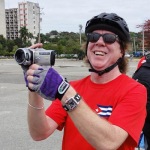 At the end of January, Rod and The Truants will be away again pedalling for charity, and they're tackling their hottest ride yet. The team are off to Cambodia for 180 km of dusty, largely off-road, steamy cycling - all for 3 great Children’s Charities. As is tradition, IronMaiden.com will be running a special fanclub-only charity auction while the boss is away. We've had a dig through the archives and come up with some cracking goodies which we hope'll raise a healthy amount of cash for the three Truants-supported charities - Nordoff Robbins Music Therapy, Childine and the Teenage Cancer Trust.

The auction will start on January 24th and run for 7 days. We've got Rod's personal Canadian 'Seventh Son' gold disc award, original Herve US tour artwork, some very rare posters signed by the band, original vinyl, limited edition & promo CDs, a signed tour jacket and the chance to watch Maiden from the sound desk at Sonisphere 2014, with Rod and many (TROOPER) beers. Like last year, we've gone for a spread of items to hopefully fit every wallet and bidding is only open to Iron Maiden Fan Club members to make sure these excellent items end up in the hands of real fans.

Usually we close with a link to Rod's 'JustGiving' page in case anyone wants to throw a few quid into the charity pot, but sadly this year we're doing things a bit differently.

As some of you may be aware, the Maiden family recently lost another member with the tragic passing of our good friend and all-round video guru Andy Matthews earlier this week. Andy was a member of the team since 2009 and brought his vast experience to, amongst other things, En Vivo and Behind the Beast, the documentary with Maiden England and all episodes of IMTV since 2009. He was a total Truant, having taken part on all three previous charity rides in Egypt, Cuba and Morocco, and had been greatly looking forward to the Cambodia ride. He also filmed and edited the brilliant and amusing short movies for each ride which can be found at www.thetruantsuk.com. Andy knew Nicko and Rod for over 30 years and previous to Maiden was awarded a Grammy for The Beatles Anthology and was the original live director for the seminal TV program 'The Word'.

If you are considering making a donation to The Truants chosen charities, please do so through Andy's page, maybe leave a few words about how you enjoyed his work with Maiden and help The Truants reach the million pound mark. Every donation, large or small, helps these very worthwhile charities and is all very much appreciated.