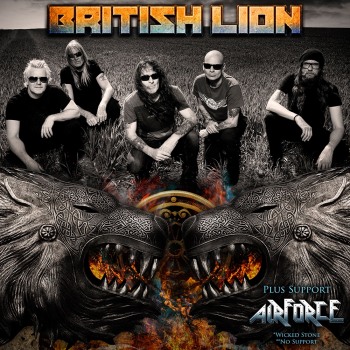 - No more dates will be added -

Support act for the tour is Airforce, except for Dover where it will be Wicked Stone*. There will be no support in London**

Tickets are on-sale now and available from www.britishlionuk.com/tour

Tickets for Gravesend are sold out!

Tickets for Hornchurch - There is no online facility to purchase tickets for the show in Hornchurch, so these will be available for purchase at the venue from Saturday 23rd October.

BRITISH LION would like to thank their agent for the exceptional work in putting together this tour at such short notice and are delighted that they will be able to play some shows this year. As the band hasn’t performed a headline tour in the UK since 2019, these dates will be the first opportunity for fans to see them playing tracks from their second album The Burning released by Warner Music (and by Explorer1 Music in the US) in January 2020, including Bible Black for which a new video was recently released.