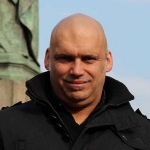 British heavy metal singer Blaze Bayley (IRON MAIDEN, WOLFSBANE) is working on songs for a new classical EP with Belgium-based classical guitarist Thomas Zwijsen. The five-song effort will include a "full classical guitar arrangement" of the IRON MAIDEN song "Sign Of The Cross", which the duo performed on their recent U.K. acoustic tour (see video below).

Zwijsen previously recorded an acoustic IRON MAIDEN tribute album called "Nylon Maiden", which featured a guest appearance by Bayley on a cover version of "The Clansman".

Zwijsen is one of the musicians who backed Bayley on Blaze's most recent European "The King Of Metal" tour.

Bayley's new studio album, "The King Of Metal", was released in March. The CD was recorded at Fear Studio in Ravenna, Italy.

The 49-year-old Bayley, who was born in Birmingham, was the original frontman in WOLFSBANE, but left in 1994 to replace Bruce Dickinson as the lead singer of IRON MAIDEN.

A reunited WOLFSBANE released its first record in 17 years in April 2011. Entitled "Did It For The Money", it contained the brand new title track along with re-recordings of four old WOLFSBANE numbers. A full-length album, "Wolfsbane Save The World", followed in January.