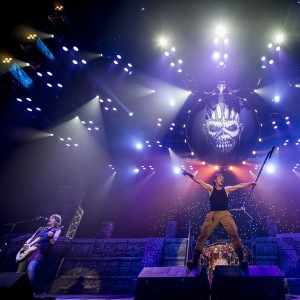 IRON MAIDEN’s recent and continued efforts to safeguard their fans against touting and counterfeiting ahead of 2017’s The Book Of Souls UK arena tour which starts on May 4th has been hailed a triumph by fans, promoters and legitimate ticketing sites.

By implementing an extensive “Paperless Ticketing” policy and ensuring all other available tickets would carry the name of the purchaser and would also require the purchaser’s credit card and ID on entry, amongst other measures, the number of tickets available at inflated prices on the secondary platforms plummeted by over 95% compared with the band’s last UK arena tour in 2011. By eliminating many of the resale platforms there was nowhere for the so called ticketing “power brokers” and counterfeiters to go to sell thus largely eliminating touting and keeping tickets on the official box office at the correct pricing, with over 100,000 tickets sold first day all at the intended price.

Proof of the success of the Maiden initiatives includes:

In November 2010 when tickets went on sale eight months in advance for Maiden’s 10 date 2011 Summer UK arena tour, 6,294 tickets appeared overnight on three of the biggest secondary ticketing platforms (Viagogo, Seatwave, Getmein) compared with just 207 tickets in 2016, all of which were listed only on Viagogo. With secondary ticketing much more developed now, the difference is probably much greater.

In 2010 Getmein and Seatwave accounted for 67% of the listed tickets. In 2016 both de-listed the Maiden tour at our request so no tickets were available from them. Stubhub also agreed not to list any Maiden tickets, so it was only Viagogo who decided to list and then, before tickets had even gone on sale to the general public, misleadingly stated there were only a few tickets still available presumably to justify the excessive pricing.

Of those 207 tickets listed by Viagogo in 2016, most were identified as bogus and are now in the hands of the relevant authorities investigating criminal activity. The few genuine tickets which made their way onto Viagogo have been made null & void per our conditions of ticket purchase.

Maiden’s promoter Live Nation confirms that overall sales are higher than the equivalent sales point in 2010.

Live Nation also confirms that customer feedback has been excellent and Ticketmaster report that they have had only positive comments about the fact the artist is trying to restrict exploitative pricing via the resale market.

Having our own dedicated support team helped our Fan Club’s ticketing experience be as seamless as possible.

“We are delighted that the paperless ticketing system and other measures we instigated here in the UK have proved a massive deterrent to touts and counterfeiters. We want to thank our fans for their enduring support and patience. We appreciate that our stringent policy has meant fans having to jump over one more hurdle in the ticket-buying process but the results speak for themselves and I think everyone can agree this was well worth it. On the first day of public sale, we sold over 100,000 tickets nationwide direct to genuine fans through the proper legitimate channels. This is an incredible achievement and victory for concert-goers, not least as this is a full 12 date UK tour we’re undertaking, not just a couple of dates in the bigger cities. We’ve calculated that around one million pounds worth of mark-up on tickets, is not sitting in the hands of touts, but instead the tickets are sitting in the hands of the fans at the correct price and we think that is a great result and makes all our efforts worthwhile.

Secondary ticketing sites operate a billion pound profiteering industry offering little to the consumer in return for their hugely inflated prices. There have been many instances highlighted in the UK media recently about the reselling of tickets for corporate or personal gain so we very much welcome the excellent work of the FanFair Alliance and the fact that the Culture, Media & Sports Committee recently re-opened the debate in the House Of Commons on this ongoing problem and trust that common sense and good judgement will prevail.”

Nigel Adams MP, Chair of the APPG on Music comments,

\"Iron Maiden and their management should be commended for their innovative approach to tackling touts. For too long, genuine fans have been fleeced by professional, well organised and greedy large scale touts who use secondary ticketing sites to profiteer. With both industry and government beginning to take action against the touts, I am hopeful we will see a fairer ticketing industry sooner rather than later.\"

“Iron Maiden has been clear from the beginning: eliminate resale and get tickets directly into the hands of fans. We’re proud that our Paperless ticketing technology has been able to achieve this for the band, their team and the fans.”

“The plan put in place to help Iron Maiden minimise resale has been a huge success. It’s great to see so many fans get behind the band and understand what they were aiming to achieve. I look forward to the tour in May.”

\"Iron Maiden have shown what artists who genuinely care can do to protect their fans against being ripped off by touts. These measures are the gold standard for the industry and other artists should consider doing the same. The most successful anti touting operation I have seen in recent years.\"

Although both shows at London’s o2 Arena and most other shows are already sold out for the May tour, due to all these initiatives fans can still get their hands on tickets AT FACE VALUE for IRON MAIDEN The Book Of Souls UK Tour 2017 in Aberdeen, Newcastle, Leeds, Sheffield and Manchester via TicketMaster.co.uk or IronMaiden.com/tours.