A message from Austin Dickinson 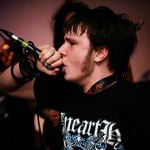 Holy shit. One year on from City Of Vultures being released in the United Kingdom and the majority of the rest of the world. Wow-eee. I figured that it'd be cool to write a little something for all of you who have followed us for so long and given us so much, I would love to give you a little insight from our side.

So, when we started this band, we knew we'd do an EP, Bridges Will Burn. We wrote that pretty quick, we re-adjusted old songs and wrote some new ones in our practice space, and we recorded it: presto! EP! That was the sound of a band that just wanted to play music and hit you as hard as it could in the head. The reaction that we had off of that was immense, with Metal Hammer releasing it as a freebie, we got amazing exposure and had some fantastic, fantastic times touring it. Then we got the push to go an do the big one: the debut record. Holy fuck. When we had our songs ready, our pre-production done and our team locked in, we'd already undergone 5x more than what we did on the EP. We won both Kerrang! and Metal Hammer's "Best Newcomer" awards and had toured our shorts off! We had already had a pretty mental journey. Things good, and bad, reared their head and looked us right in the eyes. Then, as if by magic, we are in a studio. Its the first week of recording drums at Chapel Studios, and then, suddenly, we are standing face to face with a monitor, displaying the raw drum takes, in Treehouse Studios about to start guitars. Then it all got a little mental and we spent two and a half months making the record we'd dreamed of since we were kids. When I started vocals, I had no idea whether or not people would connect with my lyrics. I also had no idea wether or not people would connect with my melodies. As strange as it sounds, you always bear your fans in mind, even when your in a booth 8-12 hours a day screaming your heart out. So I pushed myself harder than I've ever pushed myself before. It was a huge time for all of us, both Pat and I turned 20 in the studio, I spent it tracking vocals and having the time of my life. We didn't have a label, we didn't have a guarantee of a label, and we frankly didn't 100% know what we were going to immediately do afterwards. Times were uncertain, but then again, they always are. Any mitre of stress that we felt, we dealt with, because nothing would get in the way of us having this album in our hands, and, indeed, in yours. Then we finished and we ended up on a whirlwind of tours that saw us out with Bullet For My Valentine, Korn, Funeral For A Friend, Hatebreed, Soundwave in Australia, opportunities and bands that we felt absolutely honoured to tour with. All of this, before the record came out! We finally signed a record deal with EMI for COV, and then we found out that, having completed the album in November 2010, the album was coming out September 5th 2011. Woahhhh!!!!! Despite having grown as a band and a live act, we simply still had no comprehension how things could or would turn out. Would people give a damn? Would people pick it up? All these questions and more race through your mind. Well….A week after release, we charted in the UK Top 100 at #83, charted in various EU charts and got to #10 in India (which still confuses/stokes the fuck out of me…we WILL tour there soon, promise). Then we underwent our first headliner which absolutely fucking ruled, and sold out The Underworld on my 21st birthday, a year on from when I was stuck in a vocal booth screaming my guts out. And now we find ourselves a year further on yet, tens of thousands of copies of C.O.V and a world album tour later, we are on the next plateau upwards, writing new music and writing the next chapter in our band's history. How did we get here!?! Well, I think I know the answer, and its none other than you guys. If you picked up a copy, bought a shirt, watched a show or caught us at a festival, the meaning of this message is: Thank you. Thank you for helping a kid who wanted to do this his whole life achieve his dreams on our own terms, and thank you from all of us in RTR, for allowing us into your minds, stereo's and hearts. This really is the best thing in the world, and thank you for your blood, sweat and beers. This has been a crazy year, and it just gets crazier. The coming year, and the remainder of this year, are shaping up to be the biggest ones yet. I just hope your all ready for more.

We love you and I love you, with all I can give.

Thank you for this amazing gift,