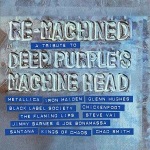 "Re-Machined: A Tribute To Machine Head" will initially be made available with Classic Rock magazine's upcoming DEEP PURPLE fanpack. Due on Septemer 4, the fanpack also comes with an in-depth, official, band-endorsed 124-page magazine which includes exclusive new interviews with world-class guitarists Joe Bonamassa and Steve Vai and the members of METALLICA, IRON MAIDEN and CHICKENFOOT, among others, talking about recording these classic songs, plus brand new interviews with DEEP PURPLE — one of the last interviews with the late Jon Lord — on the making of their most well-loved album and exclusive and previously unpublished photographs and artefacts from the PURPLE archives.

Hearing of Jon Lord's sad passing, Glenn Hughes assembled some friends to cut "Highway Star" last week as a tribute to his dear friend. The performance is one of the greatest performances Glenn Hughes has committed to record.

Drummer Lars Ulrich of METALLICA, who are also recording a song for the upcoming Ronnie James Dio tribute album, previously said, "We were asked if we'd contribute to the anniversary of 'Machine Head' — we can't turn that down. We're circling the Dio and PURPLE catalogs and hopefully we'll come up with something that is worthy of these wonderful men."