Nicko McBrain: We're a bit more refined with where we go with the tempos now 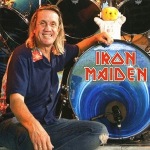 British heavy metal legends IRON MAIDEN this week landed at position No. 3 on Billboard.com's "Hot Tours" list of top-grossing tours this week with $4.8 million in ticket sales from seven performances on their 2012 tour through North America. The 34-date "Maiden England" trek is based on the band's "Seventh Son Of A Seventh Son Tour", with a setlist almost exclusively from the 1980s featuring all the classic songs and hits.

The same spectacular stage set as was used on the original 1988 tour has been recreated, complete with a magnificent light show, pyro and a newly reincarnated Eddie.

Asked by AZCentral.com what inspired the "history of MAIDEN" series of tours, MAIDEN drummer Nicko McBrain said, "The primary reason is there were these new generations of fans. We thought, 'These kids weren't even thought about when we went out with this particular tour and that particular tour.' And that's how it all started. So it works out well for us. When you're doing a brand-new record, you've got to see how the sales go on that, you've got to go on tour and promote it, which we've always done a great job of in the past. But it's nice to not have to take that side of the industry with you every time you go out on tour."

Regarding whether re-creating what he did in 1988 stirred memories of that time in IRON MAIDEN's history for him, Nicko said, "I think if you ask everybody, we kind of just know we were there but we don't remember a bloody thing about it. [laughs] But going to these places we played in that period of our lives, you sometimes get these memories jogged. It's like when you sit around a table with your childhood mates, and somebody will say one little thing and it just conjures up this memory. For me, I find it more so when I'm actually playing a song at a particular venue. I might be halfway through a song, and I'll go, 'I remember what I did after the gig that night. This is where I took my wife out and whatever happened.' Well, she wouldn't have been my wife then. [laughs, and then in a much louder voice] It might have been someone else's. [laughs]"

McBrain, who joined IRON MAIDEN in 1982 as the replacement for drummer Clive Burr, tells AZCentral.com that he still think very highly of the "Seventh Son Of A Seventh Son" album, especially now that he has had to re-learn all the material from it. "It's a masterpiece," he said. "What I tended to do was listen to the 'Maiden England' video. And I'd go, 'Gosh, I can't believe we played that song that fast.' So what we've done is — we still have a lot of energy, but as a player, I've realized that we couldn't play these songs at that speed today and make it work. We were younger, and it was a lot more crazy. We're a bit more refined with where we go with the tempos now. There are still nights where I get a bit quick, and me and Steve [Harris, bass] get going together and the rest of the band moan and groan at us because we think we're young kids again up there. [laughs] But it was really nice listening back to the old stuff because I rarely revisit the older MAIDEN material when I'm listening in my car to music."