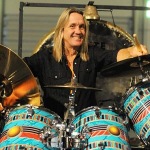 Jim Beal Jr. of the San Antonio Express-News spoke to drummer Nicko McBrain of British heavy metal legends IRON MAIDEN ahead of the band's August 15 concert at the AT&T Center in San Antonio, Texas. A couple of excerpts from the chat follow below.

McBrain: "A couple of things [have contributed to IRON MAIDEN's longevity]. The obvious one is the strength of the material. If we didn't have good songs we wouldn't still be here. And there's our passion for the music. Each of us loves the playing and the music. We love to play live. We make great records, but we also have a great love of playing live."

On whether the IRON MAIDEN bandmembers have a competitive nature:

"Our favorite album is the one we're working on now. We know there are great bands out there, but we don't worry about competing with them. We're competing with ourselves."

On reprising, with updated production, the 1988 "Seventh Son Of A Seventh Son Tour" on the current "Maiden England World Tour":

McBrain: "Last year we toured with the album 'The Final Frontier'. We didn't want to do that again. We've done a couple of history tours in the past, playing the greatest hits. This year we decided to back to the year 1988 and revisit 'Seventh Son Of A Seventh Son'. We sat down and pieced the tracks together for a set then got down to rehearsing and working out the stage production."

On IRON MAIDEN's strong ties with the fans:

McBrain: "Every band in the world will say their fans are the best, but IRON MAIDEN fans become part of the family. It's pretty hard to please all of the fans all of the time. We know some of them have a bit of a moan if a certain song is not in the set, but our fans are truly loyal and we never want to let them down."

On having three lead guitarists in IRON MAIDEN:

McBrain: "Steve [Harris, bass] and I lock in to what we do. Having three guitar players gives us fuller sound and they're all fantastic players. Sometimes I think they're almost too polite when it comes to splitting up the solos. We have a great time. After all these years, there are no egos in this band."