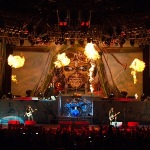 British heavy metal legends IRON MAIDEN have landed at position No. 3 on Billboard.com's "Hot Tours" list of top-grossing tours this week with $4.8 million in ticket sales from seven performances on its 2012 tour through North America.

Although the majority of IRON MAIDEN 's tour dates this summer are outdoor shed performances, arenas are also included on the itinerary. Three of those indoor events are part of this week's "Hot Tours" totals.

Multi-camera video footage of IRON MAIDEN July 2 performance at Prudential Center in Newark, New Jersey can be seen below.

The band's setlist was as follows:

The 34-date "Maiden England" tour is IRON MAIDEN's most extensive visit to North America for many years and includes a number of other cities the band have not played in a very long time such as Atlanta, Milwaukee, Buffalo, Indianapolis, Salt Lake City and Sacramento, and places like Sarnia (Ontario, Canada) and Cadott, Wisconsin where they have never visited before. The tour is based on the band's "Seventh Son Of A Seventh Son Tour", with a setlist almost exclusively from the 1980s featuring all the classic songs and hits. The same spectacular stage set as was used on the original 1988 tour has been recreated, complete with a magnificent light show, pyro and a newly reincarnated Eddie!

When asked by The Aquarian Weekly what the reason was behind choosing a setlist like that of the famous 1988 excursion, 7th Tour Of A 7th Tour, IRON MAIDEN guitarist Adrian Smith said, "Well, we just thought it'd be fun to revisit that period in time — there were some good songs there. It's just great revisiting some of the songs we haven't played for a long while. It keeps us fresh and it's just, you know, we got a lot of new fans coming on board now, a lot of younger fans who probably never saw or were around when we did that tour. That's one factor of it for us revisiting that time and I think there's some good songs from that period, so it's fun to do."

On the topic of how this tour differs from those in the recent years, Adrian said, "Well, this is a new set; we haven't taken the stage set out, for example, so it's a new stage set. We got new effects. I think it's going to be actually more spectacular than the original tour and probably, technically, you got more stuff now to put into a live show in terms of lighting and that, which will make it quite spectacular, so I think this is going to be pretty special, this tour. What with the songs, we love playing these songs, and with the stage set and effects and of course we got Eddie, he's back, so it should be fun."

The extraordinary and legendary ALICE COOPER was IRON MAIDEN's very special guest on all shows up to July 21. After that date, special guest is COHEED AND CAMBRIA, the inspiring, cutting-edge band from New York.