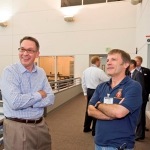 For nearly 30 years, Bruce Dickinson has been known worldwide as the voice of heavy metal band IRON MAIDEN. It's easy to see he has a passion for his music, but there's another kind of metal he's equally passionate about: airplanes.

"It's pretty much like breathing, really. It's one of those essential things," says Dickinson.

On one of the band's recent tour stops in Seattle, Dickinson made time to visit a Boeing training facility where he got insights into special equipment and the latest technolog. But Dickinson isn't just a fan of airplanes, he's becoming a major player in the aviation world, having flown as a commercial pilot and started his own airplane maintenance business in the U.K.

"I'm a pilot and I'm a singer for IRON MAIDEN, which I just think is… I'm a very lucky guy," he says.

The highlight of the day came when Dickinson got a chance to fly in a 747-8 simulator. Once inside the simulator, Dickinson executed everything from skilled takeoffs to flawless landings, proving music isn't his only talent.

Dickinson admits to being partial to Boeing airplanes, but there's a more personal element that drives his love of aviation.

"It's all about people, actually," he says. "'Cause the airplanes are wonderful, but they're built by people, designed by people, flown by people, operated by people, so actually, it's the people, I think, that really get me very excited."

Watch the three-minute Boeing report below.

Photos of Dickinson's visit to the Boeing training facility can be found at this location.