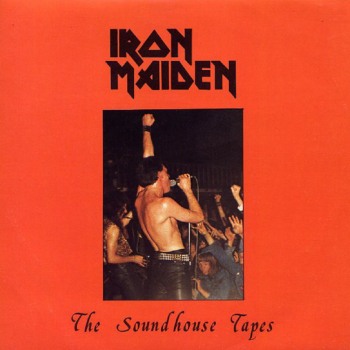 Some of these copies are actually pretty close to the original release. Being a Maiden collector myself, I'd hate to see anyone pay a large amount of money for anything less than the real thing. Therefore I made a very detailed description of what the real thing looks like. If you ever consider buying a copy of The Soundhouse Tapes I strongly suggest you take a close look at all the details I've described below.

Material of cover:
The cover is made out of a heavy kind of paper (a light version of cardboard) and it opens from the top.

Front of cover:
Color:
Dark orange or light red (it's a bit balanced, I'd say it's dark orange, though)
Logo:
Black letters, 'Iron' is written above 'Maiden', the logo is centered above the picture (the words 'Iron' and 'Maiden' are both left aligned in the center)
Picture:
The front cover has a color picture of a live performance, it shows the singer (Paul, if I'm not mistaken) with his left fist raised and holding a microphone in his right hand, also on the background you can see either one of the guitar players or Steve, I think it's Steve.
Title:
At the bottom of the sleeve the words The Soundhouse Tapes are written in a calligraphic manner.

Back of cover:
Color:
The back of the cover is in the same color as the front.

Pictures:
At the top of the cover one can find 5 pictures, from left to right they are: Doug Sampson, Dave Murray, Paul Di'Anno, Steve Harris and a picture showing a stage shot (it's an unclear picture showing the drum kit along with the background of the stage).
The corresponding names of the persons on the pictures are written underneath the pictures as I've typed them above, the names are printed in a handwritten fashion and nothing is written under the fifth picture.
At the bottom 5 more pictures have been printed, being from left to right: Maiden 'eadbangers (first picture), Live shots from the Music Machine. (the next three pictures) and Rob Loonhouse.
The text as I've written it above is exactly the way it appears under the pictures, again the text is hand-written.
All pictures which appear on the back are black and white pictures.

Every so often, one special band emerges from the mass of untried and unknown hopefuls which fill the streets of the Rock World. Iron Maiden is JUST one such band, bringing with their emergence, a style of Rock Music, so hard, gritty and honest in its delivery that only success can justify their hard toil!

The tracks on this E.P. were the first ever recorded by the band and are the authentic un-remixed cuts taken from the demo tape recorded at Spaceward studios in Cambridge on December 30th 1978, and, subsequently presented to me in The Soundhouse a week later.

After one hearing it was obvious that Iron Maiden would become one of the leaders of present day heavy metal, combining the sort of talent and hard drive that the music world must not ever ignore. Neal Kay.

History of the Soundhouse Tapes

Recording their own demo tape was one sure way to blag gigs outside the East End, and as Steve Harris was impressed by a demo Den Wilcock and Terry Wapram's new band V1 had recorded at the Spacewod Studios in Cambridge, Maiden decided to follow suit. It was dearer than a lot of local studios, but Harry realized that recording on the cheap was false economy. Old Year's night 1978 was the only time they could get booked, so they took it even though they had nowhere up there to stay. Thankfully DiAnno's romantic charms (it sez here) won the day when he pulled a young nurse in the boozer and this selfless Florence Nightingale solved the problem by inviting the whole motley crew back to a New Year's knees-up where, several sherberts later, they merrily crashed out. That first two day session set them back £200. They managed to record four Steve Harris compositions, Iron Maiden, Invasion, Prowler and Strange World and left with the intention of going back a couple of weeks later when they had more cash to flash, to polish them off, re-do the odd bum note, do a spot of remixing and so forth. However they didn't have enough readies at the time to buy the master tape, so when they did get back there they found the studio had wiped the master clean! So the demo tape which eventually made it onto vinyl was exactly the way it was recorded that 'taters New Year's Eve - and a fine testimony to Maiden's early ability that it still sounded, and indeed still sounds, so raw, cocksure and barbed wire catchy.

Soon after they took it to Neal kay, the DJ/HM Godfather who ruled the rowdy roost at the Heavy Metal Soundhouse in Kingsburym and a whole new chapter in their carrier opened.

Neal Kay recalls very well the afternoon Dave Murray brought him in a copy of the demo, that was soon to become known as The Soundhouse Tapes, to try and blag a gig. "I said 'Oh yeah'," Kay laughs, "'You and five million others.' I told him to leave it and maybe I'd get a chance to hear it a couple of weeks later. I really hate myself on that!"

But when he did play it, Kay immediately appreciated the power and the potential of the band. "I almost fell over," he grins. "I was running and screaming round the lounge like a lunatic. I just couldn't stop playing it. The next day I phoned Steve Harris at work and said to him 'You've got something here that could make you a lot of money'. And he laughed at me. He thought I was kidding!"

It was obvious to Kay that Maiden had something money couldn't buy - poverty. No, really he was impressed by a combination of things. "For a start it was a pretty together demo", he remembers. "There were a few bum notes, but Steve and co had realized that you need to use a decent studio. They hadn't wasted time, they had gone in and worked hard. And the whole package was put together amazingly well. They'd obviously thought it out to the best of their ability at the time. And musically it was staggering. It was the melody plus power that impressed me. Aggressive bands have been a dime a dozen since. But no one since has had the tunes too. The combination of power, speed, the key changes, the melody, and Dave Murray's melody lines bowled me over, It was very unique and very impressive. Definitely the most impressive demo I'd ever had delivered to me."

Maybe it was the way Harry wrote the songs that gave them their distinct flavor. All the demo songs were written on the bass rather than the guitar which obviously gives them a different feel and they were composed in pieces and then put together in the manner of most Maiden material. But whatever the band's 'X' factor [sic! //toka] was, it spelt excitement and exhilaration for everyone who saw or heard of them. Kay began playing the band's demo immediately, and no one was more surprised than Maiden when Prowler turned up in the Sounds HM chart supplied by the Soundhouse at no 20 in the 17 February '79 issue. (Kay had been sending in a weekly chart since '78 and like everything he did to do with metal, he took it very seriously, basing it strictly on requests from the kids who regularly attended the Soundhouse).

On 9 November, because of mounting interest among Britain's mayhem merchants, Maiden decided to release three un-remixed tracks from the Soundhouse Tapes - Prowler, Invasion and Iron maiden - as an EP on their own label, Rock Hard Records, pressing just 5000 copies. They used one of Loonhouse's shots on the front and cheekily used Chris Harler's contacts on the back (no, Rod never paid him) along with some suitably messianic sleeve notes from the Prophet Kay. He wrote:

"Every so often, one special band emerges from the mass of untried and unknown hopefuls which fill the streets of the Rock World. Iron Maiden is just one such band, bringing with their emergence a style of rock music so hard, gritty and honest in its delivery that only success can justify their hard toil! The tracks on this E.P. were the first ever recorded by the band and are the authentic un-remixed cuts taken from the demo tape recorded at Spacewood [sic //toka] studios in Cambridge on December 30th 1978, and subsequently presented to the Soundhouse a week later. After one hearing it was obvious that Iron Maiden would become one of the leaders of present day heavy metal, combining the sort of talent and hard drive that the music world must not ever ignore."

Blimey! It still brings a tear to the eye to this very day (if you happen to be peeling an onion at the time...)

Steve Harris actually hand-drew all the rest, including the label. The Soundhouse Tapes, as the EP was christened, never went on retail sale, but was distributed by Keith Wilfort and his mum from their house in Beaconsfield Rd, East Ham. They shifted 3000 copies in the first week alone which gives you some idea of the demand. If fact Rod got calls from major retail chains like HMV and Virgin trying to order vast quantities, 20000 got ordered by the chains in one week, and although the resulting cash would have come in very nicely, Rod refused to supply the records because the band wanted to keep the EP as something special, for the hardest of the hardcore fans only.